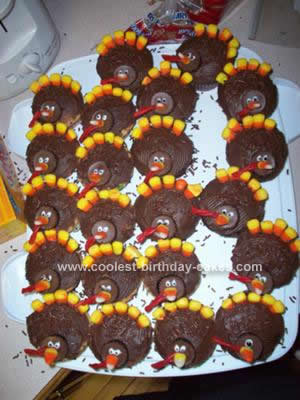 I made these Homemade Thanksgiving Turkey Cupcakes for my son’s first birthday, which was on Thanksgiving. They were super easy (though took some time) and very yummy!

First, buy a simple cake mix from the store (or make your own mix, it doesn’t matter) and then cook the cupcakes according to instructions.

Once the cupcakes are cooked, cool overnight (for added moisture you could wrap and freeze them but if you don’t they turn out fine!)

1. Ice all cupcakes with chocolate icing

2. Carefully stick toothpick through mini Reeses cup with same amount of excess on both sides of the cup (it will need to stick into the cupcake and the candy corn)

3. Separate peelable Twizzlers and cut each string into thirds, wrap one small piece around toothpick on top of Reeses cup, twist together and squeeze at the end (this will make them stick so they don’t come undone)

4. Place candy corn on top, thick end down (some will break, don’t despair! Going slowly helps and it doesn’t take much to hold them on)

5. Using white and black cake decorating gel make the eyes above the beak

6. Place the head onto the turkey “body” and press down slightly to be sure it is secure (be sure to leave some space between the edge of the cupcake and where your place the toothpick, otherwise the cupcake will not hold)

7. Use 5 extra candy corn to make the tail feathers, sticking them into the opposite end of the cupcake from the head (again, make sure there is a little space between the edge of the cupcake and where you place these or the cupcake won’t hold)

8. Sprinkle with chocolate sprinkles to give texture 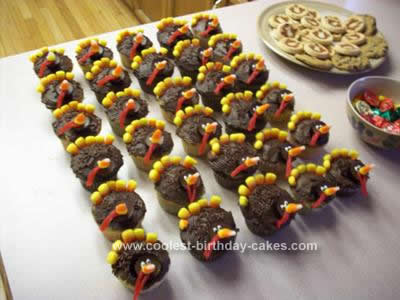