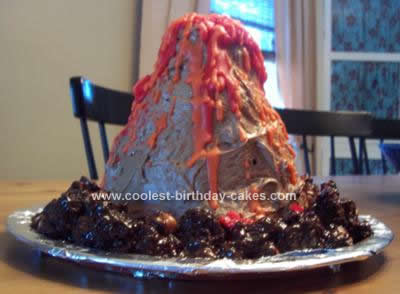 I made this Volcano Birthday Cake for my son’s 6th birthday party, and it was a huge hit. Here are the instructions:

1. Pour your cake batter into half-oval shaped oven safe bowl. I used the Pampered Chef 2 quart batter bowl. This cake is quite large, and I needed two large cake mixes to make it.

2. If the bowl you use doesn’t come to a real point (you need a point to create a nice shape at the top of the volcano), pour a bit of batter into a smaller, half round oven proof container. I used a Fiestaware teacup, but a small metal bowl or a ramekin should do the trick.

4. Allow the cakes to cool slightly, then remove them from the bowls.

5. Slice the rounded tops off of the small and large cakes (i.e. slice off the part that rises because you need them to be flat). Save the piece you have sliced off; you will use them later.

6. Place the large cake on your serving tray with the widest part down.

7. Frost the large cake with chocolate icing. Remember, the cake is quite large, so you will probably need a lot of icing. Don’t worry about making the icing smooth; it is a volcano, so the icing should not be smooth.

8. Place the smaller cake on top of the bigger cake to form the top of your volcano.

9. Scoop out a small bit of cake from the top. This will form the opening of the volcano.

10. Frost the top of the cake with chocolate icing.

11. Take the pieces of cake you cut off in step 5, break them into bite-sized pieces, and mix them in a bowl with some chocolate pudding and mini marshmallows (the marshmallows are optional, but I think they add to the effect). Spread this mixture all around the base of your cake. This creates the rocks and earth at the bottom of the volcano.

13. This is not shown in the picture, but I added several sparklers to the top of the cake and lit them when it was time to serve the cake.