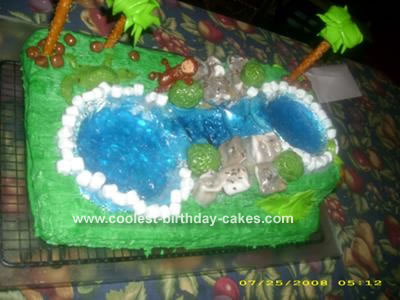 I made this waterfall cake when I was 13 years old for my neighbor’s 11th Birthday Party! I asked if he had any perforations, and he ask if I could do a safari/jungle themed cake. So I did just that.

I baked 3 different cakes. One chocolate cake baked in a 12 X 14 inch pan, and then two white cakes in a 4 x 4 inch pan. Afterwards, I prepared my fondant and icing. When the cakes were through baking, I cut out the waterfall the way I wanted it. I iced the whole cake green with a basic icing recipe.

The waterfall was created in three different steps. I used tops of plastic containers as the pool at the top most layer of the cake and the bottom layer. Then for the actual waterfall I used blue fondant along with silver and blue shine dust (made by Wilton).

As for the decorations: palm trees were made of long 6inch pretzels with green apple air heads as leaves, coconuts were tootsie rolls cut in half,

Small rocks made same as large rocks except with small sized marshmallows, 4 green bushes – green fondant rolled into ball shapes carved to look like a bush.

My neighbor’s friends,and family were amazed by my creation. They enjoyed it!