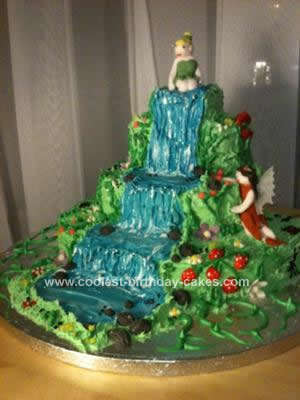 My daughter’s third birthday was approaching and as a huge fan of Tinkerbell I knew what her idea of the perfect cake would be…..or did I?

“I’d like a Tinkerbell cake Mummy” (gotcha I thought), “Oh and she is sitting on top of a waterfall” – well I must admit I hadn’t seen that one coming lol. Ok, let’s see what Mummy can do!

I trimmed up a few rectangles of Madeira cake into what looked like steps. These I iced in green buttercream (I always use Better Crocker’s vanilla and colour straight into the tub). I left the centre section bare, just where I wanted the waterfall to flow. The waterfall was iced in frosting (again Betty Crocker) this time coloured royal blue with a touch of navy blue which wasn’t completely mixed / slightly marbled.

Starting from the top my watery creation started to flow – I was pretty pleased with how well it was going. To make the water look like it was falling rather than just laying on the cake I used a normal eating fork and forked up from the bottom of each pool and dragged it until if looked frothy and splashy. To this blue I added White piping gel which always looks wet (& stays slightly tacky) to give a better effect. I added edible glitter in white and blue holographic to show some sparkle & a bit more movement. Phew water done!

Back to the grass. Once again my trusty fork was used for the grass (although I now have a grass piping nozzle and would use that if doing another). I piped frosting flowers and added piped ladybirds and bugs and vines too – just randomly and down onto the cake board too.

For the rocks and stones around the pools of water I was just going to roll little balls of grey coloured fondant – then found my daughter’s playdough icecream maker scoop – the handle has moulds for the various ice cream toppings. I found that pecan nut and chocolate drop molds worked great. These rocks I placed where I thought they might look good – busking it. In this moulded scoop there was also a strawberry, so a strawberry bush started to grow from the right side of the waterfall – I had great fun.

The fairies were made out of fondant – although I should have realized they would sink a little and when I’d finished them they had both sunk and looked a little fat, never mind – let’s just say they ate too much cake (next time I will use Mexican modelling paste).

The wings were the only things that weren’t edible. I used shrink plastic for these and I drew the veins on to them with a white gel ink pen. I knew my daughter wouldn’t want the fairies eaten anyway.

Well guys, I hope you liked my Homemade Waterfall Tinkerbell Fairy Garden Cake, thanks for finding the time to come and have a look and please let me know what you think. 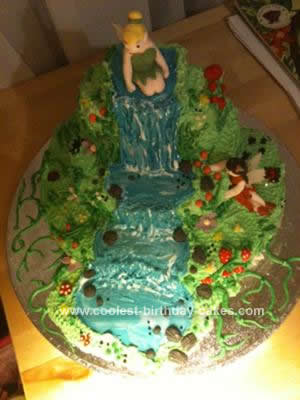 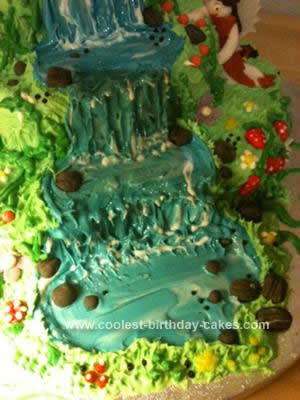