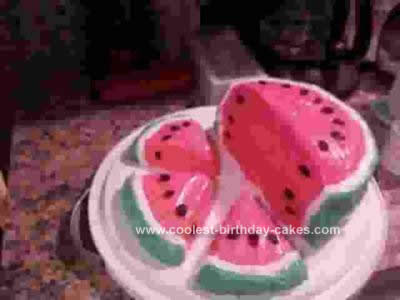 My daughter loves watermelon so I thought it would be cool to make a Watermelon Shaped Cake for her seventh birthday party. I made it a surprise, she never got to see it until I took the cover off. At first she thought it was a real watermelon sliced up.

I took two round cake pans for the design. Cut each cake in half. Stacked three cake halves on top of each other placing frosting between each layer. Then with the remaining half, I cut it into three slices to look like watermelon slices (triangular in shape.) I frosted the whole cake with pink frosting. Placed it in the fridge to set.

Then with my cake decorator kit I made a white strip at the outer edge about 1 inch, (cooled frosting so it would hold its form.) Then did green frosting for the rind, (place in fridge to set.) Placed raisins for the seeds. The frosting kept land sliding on me when I did the pink and green and I thought it was never going to turn out. Each time I placed it in the fridge and let it cool, then I used a plastic spatula and smoothed the frosting back into place.

I don’t think the cake turned out half bad. Everyone loved the cake. People commented on I should do cakes for parties. One person even said she’d pay me to do a cake for her boyfriend’s birthday. I just like to do cakes for my children, it is cheaper than buying one made at a store.