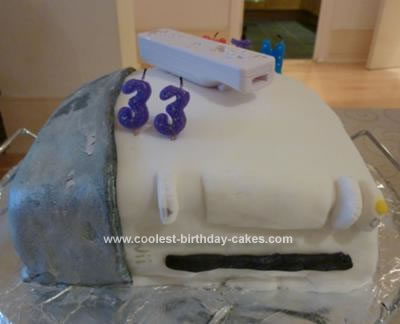 This Wii Console Cake was inspired by picture Wii 16 on this site, so thank you Heather R. My boyfriend loves video games and has many consoles but as this was my first attempt at making a decorated cake, I thought I would try to keep it simple. I baked a 9″ square lemon sponge cake (the easy bit!) which is roughly the same size as a real life Wii and then cut one side at an angle to get the right shape.

I sketched out the approximate design on cardboard the same size as the Wii (on greaseproof paper would have been easier but I was doing it in a hurry before my boyfriend came home).

I used plain white roll out icing for the base. For the metallic effect, I used black icing sprayed with PME Edible lustre spray (Pearl) although unfortunately it went a little patchy were some tin foil caught the top of it. The writing was done with edible silver powder combined with a little water and applied with a thin paintbrush. The disk drive slot was just black icing. The Wiimote is a toy sweet dispenser which was in my boyfriend’s Christmas stocking last year.

So, I didn’t manage a perfect Wii replica but my boyfriend loved it so many thanks to this site for the inspiration and tips.