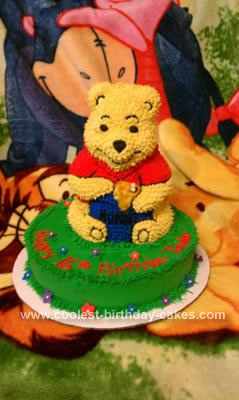 This Winnie the Pooh cake was requested by my husband’s coworker’s granddaughter for her 16th birthday. She absolutely LOVES Winnie the Pooh. When she asked, I remembered that about 10-12 years ago, I bought a 3D Winnie the Pooh pan that I never used! I made the cake, which took a little less than 2 batches, and because the heating core took up so much room.

I made a 10 inch round cake to go underneath it. All of the outlines were piped in black with tip #3. The shirt was done in red with tip #17, the pot in blue with #17 and Winnie the Pooh was a mixture of golden yellow with a little brown using tip #17 as well. The inside of his ears and pads of his feet were filled in with tip #6. The honey in the pot was first iced in the same color as Pooh, but then I went over it with piping gel tinted with the same colors (golden yellow with a tiny dot of brown). I put some plastic support dowels under him so he wouldn’t squish the round cake.

I iced it green and piped some green grass with tip #233 along the edges and a few little patches here and there. I had made some fondant for another cake that day and had some left so I tinted some blue, red and purple and made some little flowers using a cutter and impression mat in the Wilton Gum paste Flower Cutter Set. I put a tiny dot of yellow icing in the center of each flower. I also used some of the fondant to make a little bumble bee on the honey pot.

The lettering was piped in red with tip #5. The birthday girl loved it so much that she wouldn’t let anyone eat it at the party. She had her mom buy a grocery store cake for the guests to eat so she didn’t have to cut into this one. The next day, though, they had to cut into it because even with the support dowels, Pooh was pretty heavy and started to sink a little bit. So he was dessert that night!