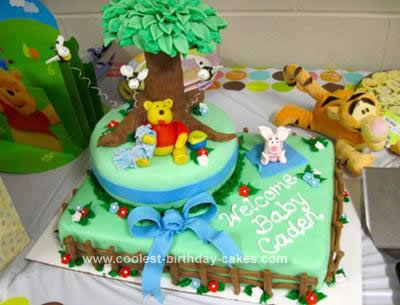 This Homemade Winnie the Pooh Birthday Cake Design is my first ever fondant covered cake! I was really worried about whether or not I could do it but was thrilled with the final results. There is a great video on Youtube on how make Winnie the Pooh and I just followed the same idea when creating Piglet. I made Winnie and Piglet several days in advance.

The tree is a chocolate covered fondant rice crispie treat. I had problems with the top of the tree. The trunk is one piece and the top is a separate piece. I was hoping the top would dry out and be stiff enough to just place on top of the trunk but it never did and in the end I had to cover a round piece of card board in fondant and put it under the tree top. This created a problem because I didn’t have enough fondant leaves to cover the addition. So I took off several of the fondant leaves and moved them around and then just used green buttercream frosting to fill in and gaps. I actually thought it looked even better with the buttercream leaves mixed with the fondant leaves. The tree trunk has a wooden skewer in the middle for added stability.

I used home-made marshmallow fondant on everything. Everyone loved the cake and the taste of the fondant. This cake was so much fun to make and now I am looking forward to even more fondant creations! 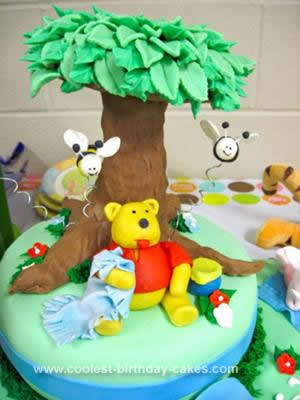 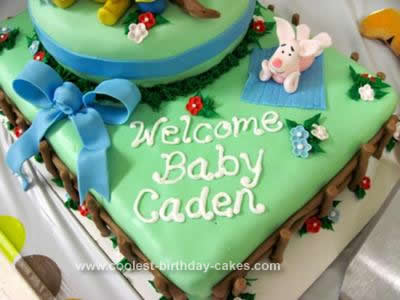 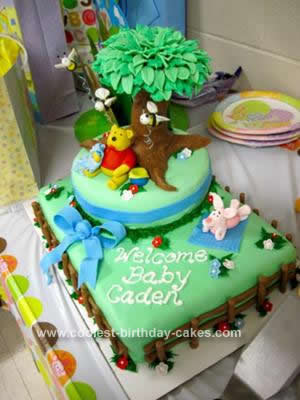