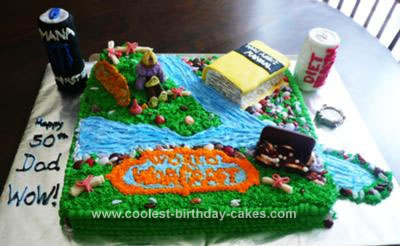 I made this World Of Warcraft theme homemade birthday cake for my DH’s 50th birthday – he’s a huge World of Warcraft fan and player. I made a base cake (16″ square) of Red Velvet (his favorite), and then a smaller 8″ square of plain white. I trimmed the 8′ white cake into a small book shape to fit on top of the base cake. I used a light crumb coat of buttercream icing on both.

On the smaller cake, I left buttercream showing on the book ends, then pulled a fondant tool through to make “pages”. I thought the unfinished side of the carved cake made nice page edges on the side, so I left that un-iced. I used yellow fondant as a “cover”, with a black fondant strip. I used decorator icing (tip 2) to write the title on top and spine.

I used rice krispy treats (shaped and carved) for the two soda cans. These were lightly iced with buttercream and then covered in fondant. I used an actual Monster can to trace the circle on top for the lid – in white fondant which I painted with Sprite mixed with Silver luster dust. All writing is done in white decorator icing. I did the “M” logo in blue fondant, painted on edges with Sprite/Silver mix. I called this “Mana Monster” after mana potions from the game.

I covered the Diet Coke can with white and red fondant lettering. All other lettering is white decorator. I painted the whole can with the Sprite/Silver mix to give it that shimmery look. I probably should have gone with gray fondant, but I ran out of time. I named this “Diet Health” after the health potions in-game.

The rest of the cake is iced in buttercream, tinted the appropriate colors (leaf green for grass and light blue for the water). I used the grass tip for the grass, with the “hill” made out of leftover scraps from the white cake (book carving leftovers). I outlined the river with chocolate river rocks (all edible). I piped in the water using the large round tip. I then used a mini spatula (from my fondant tool kit) to shape it into waves and streams. I made this go into a waterfall and lake on one side.

I went back and added tufts of grass to the rocks, and around the edges of the water. I used a shell design on the sides of the cake to keep in the same color scheme but not overdo the grassy look.

I used candy melts chocolate to form the treasure chest (using the mini-loaf pan as a mold). I filled it with homemade rock candy in various colors, as well as candy “gold”, and pearls (peppermint party favors).

Finally, I made a modeling chocolate “death knight” (character from in-game). I added his armor as best I could. It was NOT the best I could do, but it was my very first attempt ever. It would not have landed on the cake except the insistence of our four-year-old daughter who kept asking for a “DK” on the cake. :) I need to practice making more “people” models.

The signs are interesting – on the hill, it is made of royal icing that broke in half. That was okay; I had already decided to make a larger one. That one I used since it will fit in with the new expansion. The larger one in front is a base of colorflow icing design. I then topped it with buttercream to give it a more “aged” feel as well as to neaten it up.

I had a blast making this World Of Warcraft theme homemade birthday cake, although it took several hours today to finish (plus several hours here and there the past week or so).