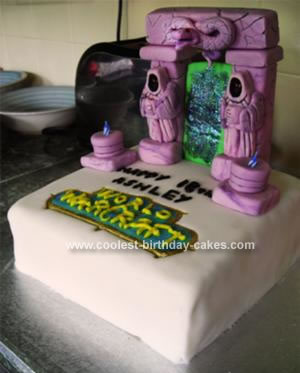 The cake topper on this World of Warcraft is completely hand crafted from fondant.

I kneaded some fondant with pink and purple colourings but not until I got the right kind of marbley effect and firstly moulded all the different blocks to make the gate and stands. I then carved cracks into the sides and painted them in with some grey colour to make them stand out.

The snake was relatively easy, I just made a sausage shape which thinned at one end and carved a snakeskin pattern into it. I made the head separately and painted the eyes red.

The ‘gatekeepers’ were the hardest part, I did them in three stages. I made the basic shape of the body, with an indentation in the top to make it seem like a hood, then I made the swords and finally I made the sleeves and hands and stuck it all together so that the swords stood out from the body.

The portal itself is green icing with edible glitter for the stars. I put in 3 bamboo sticks as supports, one through the center of the portal to keep it upright and 2 through the sides of the gate to keep them on the cake. Everything was stuck together with edible glue.

The gold and blue of the logo was handpainted and the text was written with an small-nozzled icing bag.

This took about 7 hours in total, it was hard work but definitely worth it.