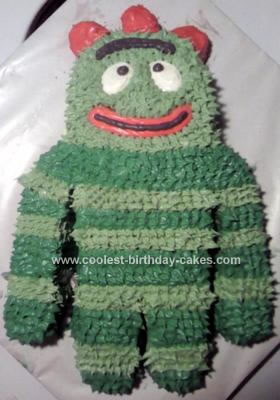 I cut the shape of Brobee out of an 8 by 13″ pan without his horns. I cut the horns out of the leftover pieces of cake. I got vanilla frosting, two tubs, and divided it to make a little bit of black for his eyebrow, mouth, and eyes. Saved some white for his eyes. A little bit of red for his horns, and mouth. And the rest light green, and dark green for his stripes.

First I made two white ovals for his eyes, and then I made the red part of his mouth. I also colored his horns red and connected them to the top. Then I did the light green frosting, piping it through a frosting bag with a tip to make him look furry. I left spaces between for each line of color.

After I did all of the light green I went back and filled in the gaps with the dark green in a frosting bag with a tip. Then I put on his eyebrow, the black line on his mouth, and his eyes. When frosting his body I learned to frost from the bottom up, that way the frosting is supported better when you adding lines and lines by tip. I used a tip that looked kind of like a flower when you look at it straight on, I just tried a few untill I found one that looked like fur when I put a few strips of frosting together.

This cake took a long time to frost this way, so if your going to try it make sure you have hours. I like how it turned out in the end.