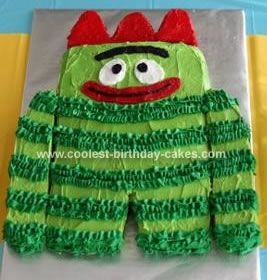 I baked a 9×13″ one-layer cake to make the body of Brobee. I baked a second 9×13″ cake and cut pieces to make the arms and the red/orange horns on his head. (I used regular chocolate cake mix.) The arms were cut from two 2×9″ rectangles, which I rounded to make shoulders and hands. The triangle horns were about 3″ tall.

I purchased a large container of Duncan Hines whipped fluffy white frosting – I think it was a 16 oz container. I found a neon set of food coloring (Durkee brand) that had a lime green, and I used almost an entire bottle of that to tint the white frosting for the light green of Brobee’s body. I also added a few drops of normal green food coloring to make it a bit darker. I used this green to frost the entire face/body/arms of Brobee.

Then I used two tubes of green Dec-A-Cake frosting to make the dark green stripes. I had the four plastic screw-in Dec-A-Cake decorative icing tips and used the long flat one (in 3 layers) for each stripe. It came out wavy, which made the stripes look more furry.

Next, I used a tube of red Dec-A-Cake (and mixed in a little bit of yellow food coloring to make it more orange/red) to frost the horns and mouth. Again, I used the decorative tips to make the mouth shape and then smoothed it later with a knife.

I reserved two spoonfuls of the white Duncan Hines frosting and smoothed that into circular shapes for the eyes, then used a tube of black Dec-A-Cake with the smallest round tip to make the black dots on the eyes, the line on the mouth and the curved unibrow.

Overall, I was really happy with how the cake turned out, although if I could do it over, I would have somehow made his body/legs a little bit longer. He’s a little bit short and squat! And very very green.