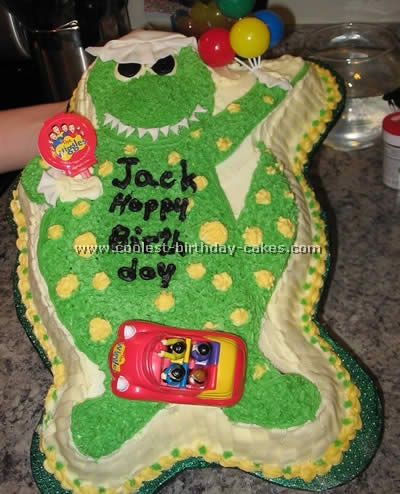 Our cousin Jack turned two and he only likes designed cakes. He loves the Wiggles; and Dorothy is his favorite character. This is a chocolate cake with buttercream icing and fondant gloves and hat was made in a pan designed for that other famous dinosaur Barney.

Cake by Sheryl B., Erina, NSW

Dorothy made easy – doing her head only is a breeze, this is one of my own designed cakes. I made up two cake mixes and put them into a large rectangular baking dish so I had a large cake to work from. With tracing paper I traced a shape of Dorothy’s face to use as a pattern for the cake. She is pretty easy to draw with some practice. Once I had her face cut out I then cut a ledge for the teeth to sit on at the bottom of the cake. I made up lots of green icing (I used almost half a bottle of coloring to get the right colour) to ice the cake.

To make the hat, teeth and eyes I used white icing pre made (Christmas Cake Icing). This way you can get a really great shape and look. The teeth were simply cut into shape and placed on the ledge once iced. For the eyes I used a desert spoon as my guide and then drew in the black with a texture. The hat was a bit trickier. I first placed the cap over and cut away any rough edges, and then I did the rim with a large rolled piece and gathered it as I placed it on the cake. I used licorice for the lines on the hat and eyebrows. I finished it off with a fake red rose on the hat.

I hope this helps all of you out there wanting to attempt a Dorothy Cake without the hassle of doing her whole body. My son just adored the cake, I was surprised he wanted to eat it!

This was done for my little girls second birthday. The cake topper I made using fondant/gum paste. The arch and roses were made from gum paste and Dorothy was made from fondant. The top layer of this cake is made from a florist block and cut and covered to make it look like real cake. The bottom layer was marbled butter cake with buttercream filling and covered in fondant with a fondant picket fence made with a pasta machine.

I enjoy making designed cakes. It took a while but was worth all the effort. Thanks for looking.

I used an extra large rectangular baking dish with three packet cake mixes to make the sponge. I downloaded a picture of Dorothy from the Wiggles website and blew it up on the photocopier. Using cocktail sticks to keep it in place. I cut around the outline of the cake. I had to cut out one arm from a left over piece and used the butter cream to reattach it.

I used paper doilies to make the gloves and cream butter icing for the hat. I melted white chocolate with a little bit of yellow icing and made Dorothy’s dots. I cooled them on baking paper and then was able to peel them off when needed. I used licorice lace to outline the cake and mint jelly leaves made the spines on the tail. Marshmallows cut into triangles made her teeth.

I finished the whole thing with an artificial rose for her to hold. My two year old was absolutely delighted – as was I! I have never designed cakes before so this was a great success!

For this Dorothy the Dinosaur cake I started with a rectangular cake. I printed the image off on the computer, and placed it on to the cake. I carved around the paper to shape the cake. Then, I iced Dorothy freehand using butter cream icing.