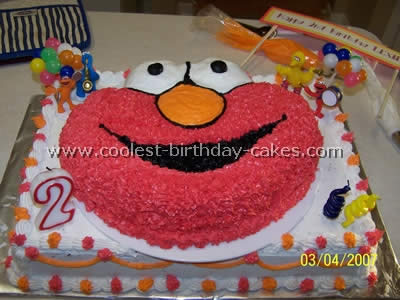 I scoured this site to find cool Elmo birthday cakes as inspiration. This Elmo cake was made for my niece who loves Elmo. The bottom layer is a white cake size 10 x 14. The top layer is a Wilton Elmo cake pan and a chocolate cake. It is supported by a Wilton cake circular cake stand.

She was very happy with this Elmo and it was a big hit for all.

Cake by Matilde R, Mississauga, ON

I would suggest doing the back ground with white icing using star tip #16 as well instead of icing it smooth. It is a lot easier and looks nicer. This cake pan was purchased on e bay as it is a discontinued Wilton pan. You can print the instructions off the Wiltons site for Elmo birthday cakes.

My daughter loves Elmo so I hired the Elmo cake pan from a cake shop and gave it a go. I got my ideas for Elmo birthday cakes from all the other great Elmo cakes that have been submitted on this website.

I used normal icing for the eyes, nose and mouth as I was able to keep it very smooth. I used buttercream for the red fur. It was really difficult to get the red so bright but it actually seemed to get redder the longer it sat in the bowl. I piped it on using a disposable piping bag which seemed to work just fine.

I didn’t want to spend a lot of money on a professional piping bag as I had never done anything like this before and didn’t know if I would again! My daughter loved it and I got lots of positive comments.

For my daughter’s second birthday she wanted a Sesame Street theme. The first picture is her main cake which used the Wilton Elmo cake pan. I used a star tip for the red and just frosted the other colors to give it some contrast. I found that Wilton “Icing Colors” gel color worked great to make red- although I used a whole 1/2 oz jar. For the black I used the AmeriColor brand super black and only needed a few drops to get a great black color (another tip- if making black use chocolate frosting- much easier).

Olivia has 15 cousins and I know that kids love cupcakes so I decided to do those for the kids (which when you have a large family meant I didn’t have to bake two Elmo birthday cakes).

I used the Wilton gel again for Cookie Monster. For the eyes I got the circle white chocolates that you can melt down for molded candy. They were the perfect size for eyes.

I used orange peanut M&Ms for Elmo’s nose and I just freehanded the mouths looking off the plates I had bought.

This Elmo cake was made simply by using one cake mix and two 8 inch round cake pans. I bought two containers of Pillsbury’s Creamy vanilla frosting for the decorating. I tinted one and a quarter containers of icing red and spread some between the two stacked layers. I tinted a small amount of the icing black for his mouth and put it in the microwave until it was pourable.

I spread this out in a rough shape for Elmo’s mouth. I then used Wilton’s paste food coloring in red for Elmo’s fur and for between the two cake layers. I simply went over the first layer of hardened black icing until I was happy with the shape of Elmo’s mouth. I used the same microwave technique to pour vanilla icing over two vanilla sandwich cookies for his eyes. I used meltable candy wafers from the craft section at Wal-Mart tinted black and orange respectively for Elmo’s pupils and nose. I simply poured and shaped his nose on parchment paper and put in the fridge to set.

Elmo birthday cakes are always easy and inexpensive to make.

I made these Sesame characters and Elmo birthday cakes for my son’s 1st birthday. I actually surprised myself with how well they turned out! I originally purchased an Elmo cake pan on E-bay but it didn’t arrive in time for me to use it. So I winged it instead.

I used one box mix and made one round cake and five jumbo cupcakes. I purchased a set of Wilton decorating tips just for this so it was a new experience for me. I started with the cupcakes as “practice” and made Big Bird, Oscar, Cookie Monster, Elmo and one that just said Happy Birthday Wyatt.

Then I went on to the big Elmo cake. I used homemade sour cream frosting and almost a whole bottle of red food coloring. The face was done with the bigger of the two star tips and I used the smaller star tip for the eyes and nose. The mouth I piped on with leftover store bought black icing. It took me until 2:00am to finish (I started at 8:00pm) but it was well worth it to see my little boy have so much fun making a mess and yes the big Sesame street cake was all his!

Cake by Claudia B., Atlanta, GA

My nephew wanted any kind of Elmo birthday cakes for his birthday so I found this on your site. I used three round cakes. Before cutting the cake form I drew Elmo on paper and cut out the body. Then I took tracing paper to cut the cake (to avoid any mistakes especially with his head). After all parts were put together on tray Elmo was iced with frosting.

I purchased white frosting and colored as needed. For most of Elmo’s body (body, arms and cheeks) red coloring was added to frosting. For his nose orange coloring was added to frosting. For eyes it remained white. For mouth and pupils I used black frosting from tubing. For his fur coconut flakes were used. A handful was dyed at a time. Add red coloring as needed and after frosting Elmo coat him with coconut fur. My 2 year-old nephew loved it.

The chocolate base of the cake was made from a 24inch round pan. Elmo’s head was made by baking two white cake mixes in the Pampered Chef large measuring bowl. When cooled the dome cake is trimmed, cut in half and assembled. Both layers of the Elmo birthday cakes we covered in butter cream frosting.

Elmo was given red hair with a Wilton hair tip. It makes great hair. The eyes are Ping Pong balls with some black “spray can” frosting.

For my Elmo birthday cakes I made two 9″ round cakes of any flavor. I went and got one can of frosting and put the frosting on the cake. For the elmo I made the basic butter cream icing and I decorated it on a peace of wax paper so if I made a mistake I would be able to fix it.

I colored the icing as you see red, black and white. I printed out a picture of the face and I traced it with the icing. After I was done I put the icing in the freezer and waited until it was frozen rock hard and I carefully flipped the wax paper over on the cake and put the elmo face on the cake. It is really easy the only thing that you have to make is the face Make sure that you freeze it long enough maybe and hour or longer.

I made this cake for a friend of mine who found some napkins at the dollar store with pictures of elmo birthday cakes on them. It was not too hard to free hand on the cake because Elmo does not have a lot of features.

I had lots of fun making the cake. The most important part was to get the nose and eyes done first so they were center and get hands and arms to scale without having them go off the cake.

I made elmo birthday cakes for a little boy’s 1st birthday. It was just a yellow cake with no filling. It was decorated with butter cream icing made from scratch.

For my son Justin’s 2nd birthday party, I made this Elmo birthday cake. I just used the Wilton’s cake pan, his favorite lemon cake mix and made lemon butter cream icing and dyed the icing colors that I needed.