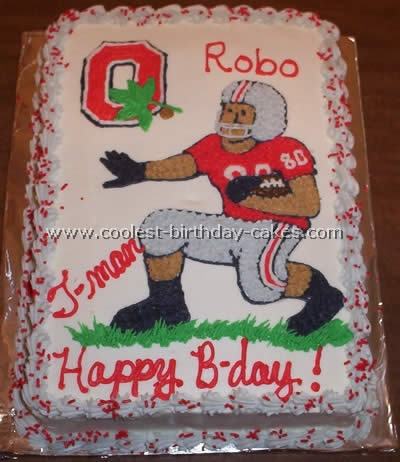 I was asked to make an Ohio State University Football birthday cake for an eight year old’s birthday. He had very specific instructions. He needed the block “O” that is OSU’s symbol and his favorite football player nicknamed “Robo”. I found a coloring book page online and used that for the football player. I traced the picture onto the iced cake using a toothpick and then made the uniform and helmet the OSU colors.

I put the number on his jersey and also traced the “O” from a pattern. This was a lot of work but turned out very well. This could be adjusted to match your own school/favorite team colors/number etc.

Cake by Jennifer B., Bowdon GA

This football birthday cake was made for my brother’s 39th birthday. It was celebrated on the same night the Patriots completed their perfect 16-0 season. It was prepared with a Duncan Hines yellow cake mix and a Nordicware Stadium cake pan from Williams Sonoma.

It is decorated with a buttercream frosting. I used green sprinkles for the field Patriots birthday candles from the Patriots Pro Shop and a mini chocolate football. It was a big hit!

My son was having his ninth birthday and wanted a Saints football cake. This football birthday cake is what I came up with and I drew it out with a toothpick and filled it in with stars.

This was a football birthday cake I made for my friend’s little boy for his birthday. It is two rectangle cakes together. I frosted it with buttercream frosting tinting with green coloring. The football I baked in a glass bowl and trimmed it to look like a football. It is chocolate with chocolate cream frosting. The Steelers sign is made with a shrinky dink.

I made this football birthday cake for my boyfriend’s father on Kickoff Weekend (even though it wasn’t his birthday). It’s an 8 inch square cake iced with buttercream frosting. I piped the lines and numbers of the football field with a piping bag and buttercream icing. The Patriots logo, Steelers logo, goalpost, Tom Brady and Ben Roethlisberger are made out of royal icing.

I used pictures from the internet under a piece of wax paper to trace the figures. I first traced around the entire picture and then did the inside outline. After that dried I filled in the inside. It took a lot of time! I was surprised how well the quarterbacks came out! I let them dry and added them to the iced cake. I piped their names and the names of the teams with buttercream icing and added some colored sugars.

Cake by Kelli B., Conroe, TX

This football birthday cake is a 13×18 size chocolate cake (two 13×9 cakes put side-to-side). I iced it in buttercream and covered it with homemade marshmallow fondant colored green. The yellow and purple end zones were also homemade fondant that had been colored.

Once the field and end zones were together I piped the lines and numbers added the lettering for the end zones and birthday message all in buttercream. The bottom border was alternating yellow and purple buttercream dots.