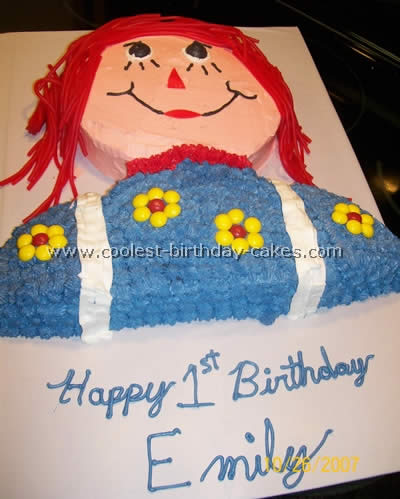 I used two 8″ round pans for this cake. Use one for the head and cut the other one in half. Take the first half and use for the body and the second half cut in half again. Use the wedges to give Raggedy Ann some shoulders. I used butter cream icing for decorating with a star tip for the blue dress.

I used Wilton’s peach color for the face and white for the straps. I used black icing for the eyes and eye lashes. I used strawberry fruit rollups for the nose and mouth and skittles candy for the flowers. I cut Twizzlers in half for Raggedy Ann’s hair and used red canned icing for the collar.

This was a real fun cake design and so easy to do. It took about an hour from start to finish.

I made this cake for my niece on her second birthday. I had so much fun making it and more fun watching her eat it. I went searching on the internet for a fun cake design and came across Raggedy Ann. I could not find a Raggedy Ann cake pan but I found a recipe for one on celebrateexpress.com.

I used Wilton icing coloring for the flesh tone, lemon heads and cinnamon candy for the flowers, red licorice for the hair, red fruit roll ups for the mouth and nose and hand drew the rest. It is a great recipe and easy to decorate.

I wish I had pictures to share of her eating it. She had blue icing all over her hands and face.

I used an eight inch casserole dish that was round for the head and an eight inch round pan for the body which I cut in half to just make the chest area. I frosted the cake in buttercream frosting. I used skittles for the flowers and red peel apart licorice cut in smaller strips for the hair.

This was a really fun cake design and hope that you all have as much fun to make this as I did.

This cake design was for a baby shower, but could be done for a birthday too. It’s a double layer sheet cake with butter cream icing. I used a basket weave around sides. I printed a picture from the internet and sized it to fit the space I needed.

I frosted the whole cake first. Then cut out the picture and laid it on the cake and traced the out line with a toothpick. I piped in the outline and l then stared in the color. Early prep work at the beginning of the week helped. I made the frosting and the cake ahead of time, and froze the cake till I needed it.