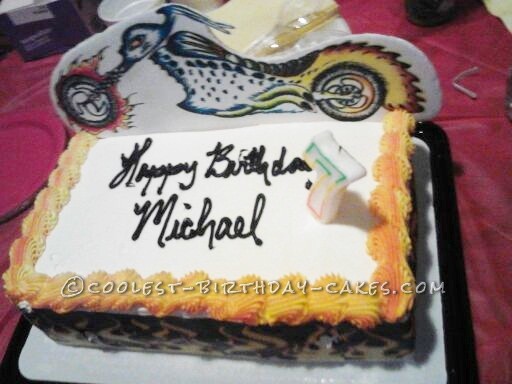 I spent a lot of time searching around the internet for a place that would make this cake for my son’s birthday but to no avail.  I finally stumbled upon this page and noticed I was not the only mom that was having this problem and saw that this also motivated moms to get creative.  I am a cook by trade but my baking is not great enough to be able to make a Ghost Rider face on a cake, I think. I went with what I know best and that is art.

First I made the cake how you usually would, mixing the batter and baking.  This cake was 1/4 sheet because it needed to feed more then 10 people and we knew the kids would want seconds.  As my cake baked in the oven I began making the whipped cream icing and keeping it cool in the refrigerator.  Because I doubted my ability with using icing for flames, I printed out the flames to attach to the sides of the cake.  Although I did decorate the top edges with flame colored icing by mixing some food coloring into the part of the whipped cream..mixing red and yellow and storing in a piping bag for later use.

If you don’t have a piping bag you can definitely use a plastic sandwich bag and just cut the tip from one of the corners. After my cake had been made and cooled I was able to apply the all white icing in the middle as filling and my son also wanted strawberries which I had to slice and spread in the middle along with icing.  After the whole cake was covered in icing I began applying the printed flames. Keep in mind that these have to be applied shortly before serving and it has to be very dry before applying to prevent the ink to bleed through.

Once the side flames were applied I began piping the “flames” on the top edges of the cake.  For the Ghost Rider bike I pretty much just looked at pictures and drew as best as I could. There was supposed to be a Ghost Rider figure standing beside the bike but I couldn’t find one anywhere on short notice.  I finally wrote Happy Birthday Michael in the center.  Once the cake was going to be served we added the candle and inserted the motorcycle on top. He loved it!