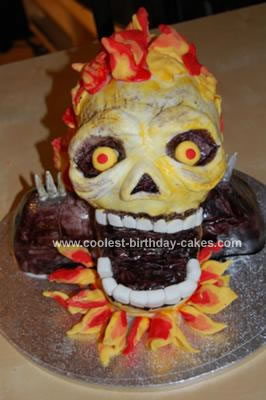 After the success of my Dalek Sec cake that I uploaded last year, my son asked for a Ghost Rider Birthday Cake . It was an interesting experience. He didn’t want a simple flat cake. He wanted a proper skull shape!

I bought two chocolate marble cakes large rectangular ones (not very good at cooking them – only like decorating them)!

Placed one cake on top of the other and cut off about an eighth across to form the shoulders and neck. I used cake rods to help with holding the head in place. I then cut the rest to form the skull shape and used frosting to hold cake layers together. i covered the skull with rolled white icing.

I realized that the head was too heavy and so added in more rods. (I had to support it on two mugs which were luckily the right height). Unfortunately that was still not enough to hold it in place so decided that I needed to support it at the front too so decided to give it a huge mouth.

I used rolled up icing to make spikes on the jacket, his teeth, tongue, nasal cavity, eye balls and eye sockets.

I coloured some red, orange and yellow icing which I used for the flames. I made individual flames onto cocktail sticks so that they were easy to place on the skull and around the mouth.

Just before the party I removed the mugs so that there was less risk of the skull falling backwards. It ended up working very well and the kids recognized it immediately and loved it!

Now got to think of a Lego cake for him. Somehow I don’t think a Lego block will cut it!