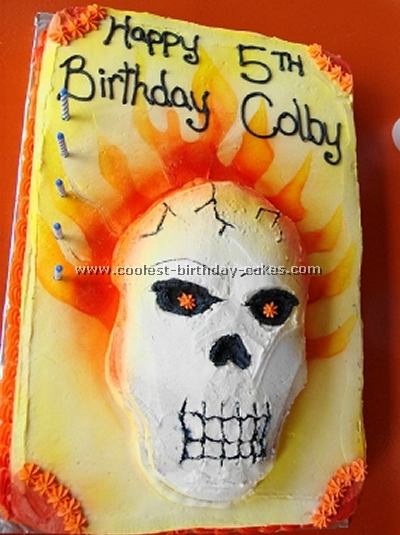 What a cake order! A little five year old wanted a Ghost Rider cake for his birthday? It was a challenge because there were no ideas on the web for such cakes. So this is what I came up with.

I made a full sheet cake and iced with yellow tinted icing then made a cake in my football pan. I use a picture off the internet to carve out the skull then iced it white with black eyes, sockets and outlined the teeth and cracks with a toothpick I was dipping into black food coloring gel. Before I placed the skull on the cake I drew and cut out flame templates on waxed paper and placed on cake and used red and orange spray food coloring to paint the flames.

Then I placed the skull on carefully and put a red dot in both eye sockets. To fit in a cake box I had bought one with a window so I just tore the window out so it wouldn’t hit the skull.

The Birthday boy and everyone loved this ghost cake! It was a hit!