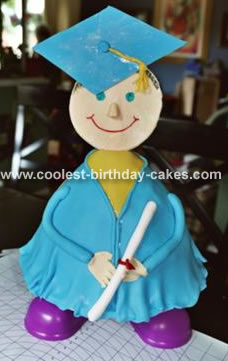 To start out with this graduation cake, I made one 10″ round cake and one cake in the wonder mold cake pan. After the cakes were cooled, I placed the round cake on the silly feet cake stand, and the wonder cake on top of it. I then frosted the entire cake in blue buttercream.

I rolled out a large piece of blue fondant (dyed the same color as the buttercream) and placed that over the cake. Then I trimmed the fondant to leave the hem for the graduation gown.

Out of peach colored fondant, I cut a large circle and put it aside to dry. I also fashioned a triangular nose out of peach fondant and applied it to the large circle with piping gel. Once the circle (the face) was dry (over 24 hours), I added eyes, mouth and hair using edible food markers.

Next, I took two lollipop sticks and attached them to the back of the face/mortarboard with some additional fondant (same colors as the face and mortarboard).

I cut out a piece of white fondant to look like the shirt and affixed it to the top of the graduate with piping gel. I then took some blue fondant, rolled it out and added it as the collar.

On the back of the graduate, I cut out letters to spell out my son’s school and the year, affixing them with piping gel.

At the last minute, I inserted the head into the top of the graduate.