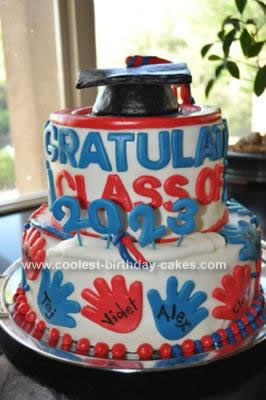 This Graduation Cake was for a kindergarten graduation party and my fourth “fancy” cake. I had to get into making cakes since my kid is allergic to eggs. The kids will be the class of 2023 when they graduate high school.

Three days before, I made chocolate and vanilla vegan cakes, larger rounds, smaller rounds, and a cupcake for the top. I froze them wrapped up in plastic.

I made marshmallow fondant two days before, dyed red/blue with basic food coloring to match our school colors. I dyed a small amount black with Wilton black dye. Fondant needs to be made day before using so that it can set, but heat slightly (10 sec) in the microwave before molding. I rolled out and cut the letters and hands using cutters. Left them out to dry. I wrote all the kids names on the hands using a food safe marker, Wilton brand.

Day before, I frosted the thawing cakes in buttercream and decorated. I rolled out the white fondant. Covered the cakes, this takes practice. And there were flaws, but I had the hands to cover them. Then I put the cut-outs on with a little dab of water. I made the little balls, and strips at the end. I did the hat last (didn’t want to contaminate anything with black fondant). For the top of the hat, I used card stock. I rolled the black fondant out on top of a piece of paper cut the right size. I trimmed, let it sit overnight to harden a bit. Made tassel and a bow for the back and left that to harden too.

Finalized and delivered (nervously). Placed hat brim on. It still drooped on the cupcake, so I propped it up with 3 toothpicks, strategically stuck under. I used a red strip around the hat, and placed the hat on a circle of blue because there was too much white on top. I made those circular pieces with some bowls.