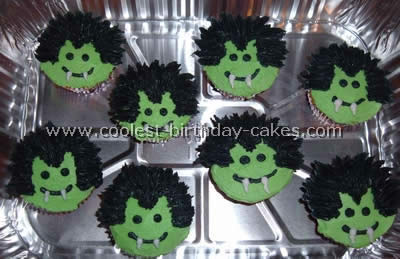 I made Halloween cupcakes like normal and iced them green. Then the fun started. I made black icing (this took a bit!) and used a star tip to create the hair.

I made these Halloween cupcakes for some friends for Halloween. I used the Wiltons petal tip for the mummy raps and the rest was just decorated with different sized round tips. To make the spider webs just pipe thin black circles and then drag a toothpick through them towards the center one. They were a blast to make and people really enjoyed them.

I got this idea for the Halloween cupcakes from the Wilton web site. It was very easy to make and the children loved them.

I made these Halloween cupcakes for my daughter’s 5th grade Halloween party. I got the ideas for the Mummy Frankenstein Monster and Eyeball from Wilton.com. It helps to have all your icing tinted and your bags filled.

Frost all the backgrounds of the cupcakes then do one color at a time. The assembly line technique speeds things up. The skeleton was the most time oncoming; the spider web was the fastest. You could easily add a spider. Just have fun!

I got this Halloween cupcakes recipe on Ettores.com (a local well known bakery).

First, you make the cupcakes using white cups for cupcakes. Then you frost the top with chocolate frosting, using a frosting gun (sorry, can’t think of the real name). Swirl the frosting like soft serve ice cream. I used a homemade chocolate buttercream recipe. Then you place the frosted cupcakes in the fridge so the frosting can harden.

Next, you roll out a small ball of fondant frosting, thin. Use something to cut out a circle (a large cookie cutter, canister, etc). I used a Tupperware canister. The circle should be big enough to lay over the cupcake but not touch the plate. Use a straw to poke out the eyes.

Monsters, Mummies and Frankenstein cupcakes.  Monster and Mummy ideas were taken from the Wilton Website (although I used butter cream icing rather than fondant for mummies).