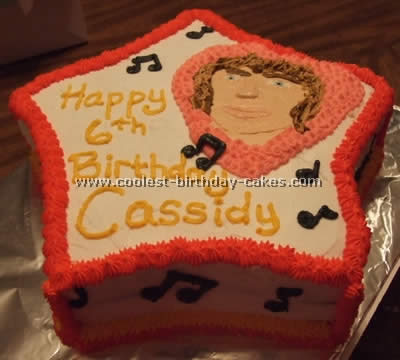 I made this cake for a friend’s daughter’s birthday. She wanted a High School Musical cake with Troy Bolton on it. I used two cake mixes and a star shape pan for the shape of the cake. I printed off a picture of Troy and used tracing paper and piping gel to transfer the image onto the top and did the best I could to get it to look like him.

I decorated each of the sides a little differently using things from High School Musical as inspiration. 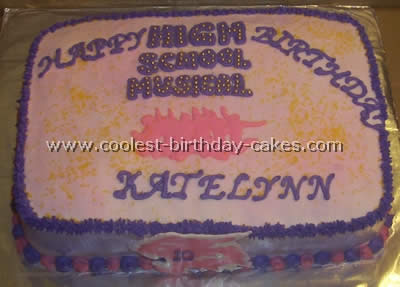 For this High School musical cake I baked a cake in a 9×13 pan, iced it then used Wiltons colour spray in a can. The High school musical kids are a cut out template I made from parchment paper traced the picture. I then placed it on the cake and outlined the template with a toothpick. I then outlined the previous outline on the cake with icing in tip #3 then I used very runny royal icing to fill in with tip #4 and in the smaller part of the outline like the hands I just used a toothpick to push the icing into the spot.

The wildcat was a traced on parchment paper then taped to a cookie tray. This was done with Wiltons color flow (tip #3 and #4) color flow for the outline then watered down to fill in. this needs to be done a week in advance so it can completely dry. It was attached to the side of the decorated cake with buttercream icing. The High school Musical on the cake was buttercream icing outlined and filled in with tip #4 then smoothed down with cornstarch dipped finger. The gold ball sprinkles were added to the High school musical part with a pair of tweezers then pushed into place. It was a big hit!

Cake by Kristi B., Burleson, TX 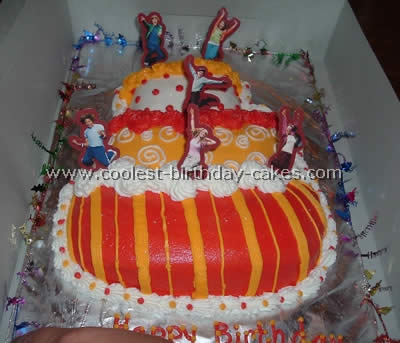 I piped a shell border around the entire cake using tip #21 and piped red and yellow dots using tip #3. The characters on the cake are from a package of table confetti I bought from a party store. I placed each character on a toothpick and placed it into the cake. The girls loved this cake!! 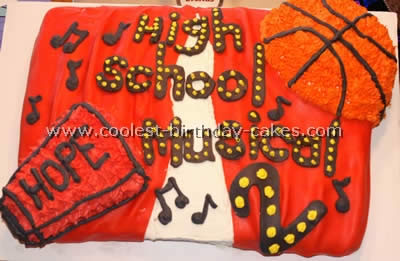 This was a High School musical cake for a friend’s daughter’s sixth birthday. I made a full sheet cake and a small round (double layer). I cut a round notch in the top of the sheet cake and placed the “ball” in the corner and used the excess to shape the megaphone on top of the bottom corner. I used fondant for the curtains and letters.