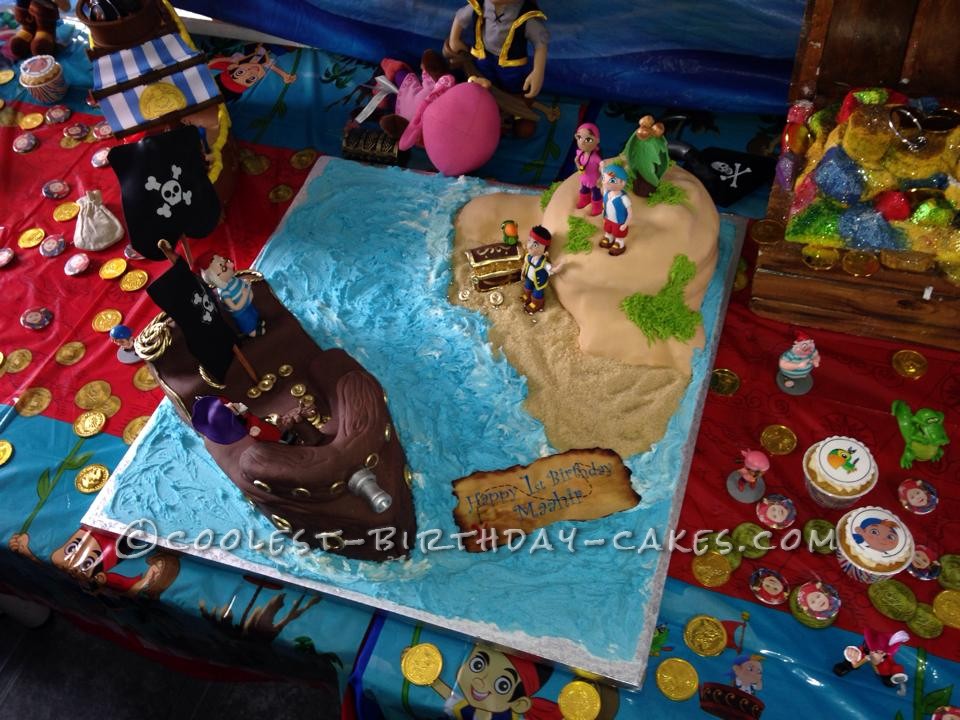 Who doesn’t love pirates?! and the new generation, a group of young but formidable foes of Captain Hook make me feel like going back to my childhood, but with all the new characters out there! *Peter Pan I still love you and Wendy, just saying…

This cake took so long to make and I was pooped at the end of it! I used a huge board to place my scene, which shows Captain Hook furious on the ship with just a few scattered coins because Jake, Izzy, Cubby and Skully got away with the treasure. Smithy or “Smee” can also be seen, confused.

The ship is made from chocolate cake with delicious dark chocolate butter cream and the island is also chocolate cake, but with chocolate mousse filling. I was a bit concerned about the volatile filling in the island at first, but then I realized that if it decided to bulge that would be fine because it would add to the topography of the island, since it’s not a straight cake that requires neatness.

The majority of the board is covered with blue and white butter cream, to represent the sea and the treasure map floating on it is an edible print. There is so much one can do with edible prints and I never miss an opportunity to use them. I basically looked for something that looked like burnt paper on the internet, then I used MS Publisher to create the picture, with the dotted line leading to the X. I also used the map to write “Happy 1st birthday Maahir”.

This friend of mine was so excited about his boy’s first birthday and he went all out with large prints of his baby in pirate gear and also had massive lollies made with his fave on! He had banners printed with Maahir’s name on and bought so many Jake and friends dolls. I made some cupcakes too to match the theme, with the Neverland pirates’ faces in edible print on fondant discs, which I cut with a scalloped circle cutter.

I just love pirate cakes! Don’t you think this one is the coolest? 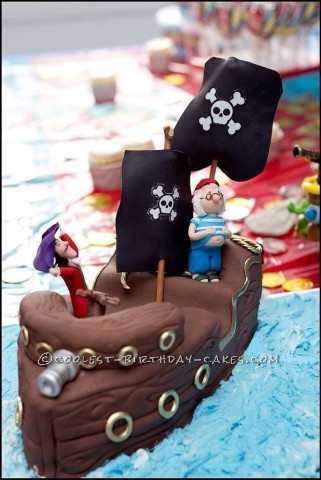