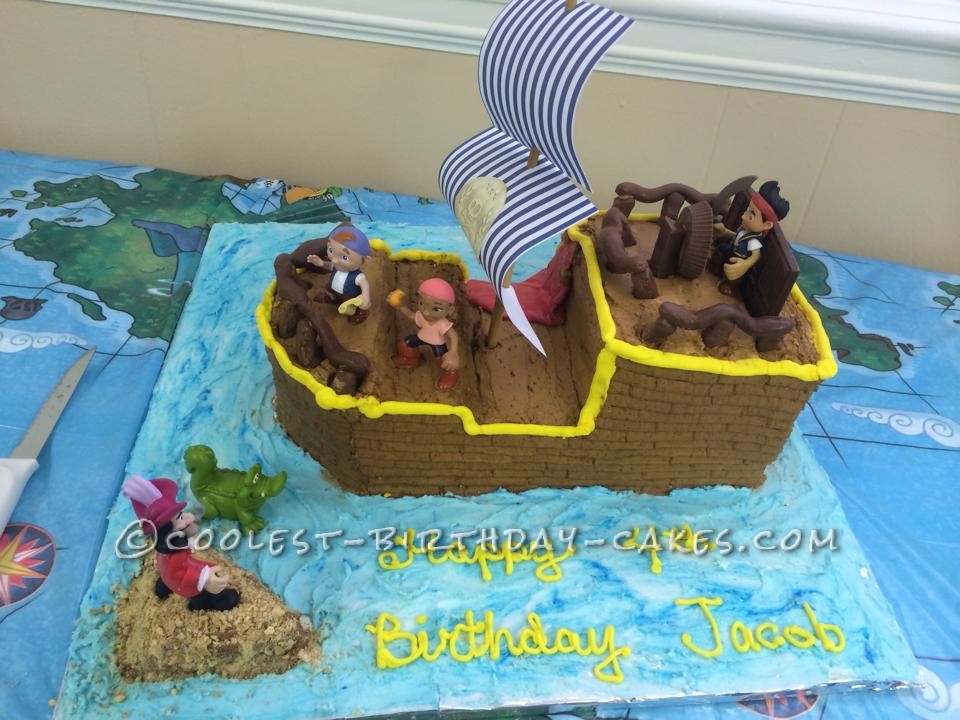 My nephew was turning 4 and my sister sent me a link to a bucky cake.  She had decided to do his party in a Jake and the Neverland Pirates theme.  I baked a thin chocolate cake and a thin white cake. Once cooled, my daughter and I cut them to form the ship.  I used about 5 layers of the chocolate cake for the back and she used a few layers cut different sizes for the front.

Then we iced the whole thing. With brown icing and a basket tip, my daughter gave the ship a wood look. Using a round, 10 or 12 tip, I made the yellow border around the top. Then it got interesting. The instructions I was following said to melt Tootsie Rolls in the microwave and form them to make the rails around the back and front of the ship.  As you can tell from the picture, my Tootsie Rolls didn’t cooperate and hold their shape so we have wavy rails. It also said to use a Hershey bar for the back of the ship at the top. Thankfully, I had 2 Hershey bars. I divided the first one in half and put both pieces in side by side.

When we were about finished with the cake, the whole back side fell off from the weight of the Hershey bars (I might have screamed, I’m not sure).  I opened the other one and put one in sideways and fixed the icing.  Then I wondered if the whole backside would be off by the time I got up the next morning.  Thankfully, it held, even on the ride to the party.  For the ship’s wheel I stood a Kit-Kat bar into the cake and attached a Reese’s cup to it with some icing.  It was probably the easiest part of the whole cake. Another glitch was the slide.  Bucky has a red slide that goes from the top level slightly over the side of the lower level.  If you look closely, you can see red on the other side of the mast.  The instructions said to use cherry Air Heads.  I had looked a couple of places and couldn’t find any.  At one store there was a variety pack of Air Heads or individual Laffy Taffy.

My daughter and I both thought Laffy Taffy would work just as well so I bought a cherry Laffy Taffy.  When I opened it, it was pink instead of red.  Who knew a cherry flavored candy wouldn’t be red?  By this point, it was late in the evening the night before the party and I really didn’t want to go back to the store so I improvised.  I softened the Laffy Taffy in the microwave and then added some red icing color.  I had to massage that quite a bit to get it to look red but it eventually worked (I was smart enough to think to put on rubber gloves so I didn’t end up with red hands.)  I think I had to microwave it a couple of times while working with it. At one point, I thought I would go out the next morning and get Air Heads but I persevered and finally ended up with a red slide.

I used a chop stick for the mast.  My husband had stopped at Hobby Lobby and bought the blue striped paper that my daughter cut for the mast.  I printed the gold doubloon from the Internet and glued it onto the paper.  I put a small scrap of cake on the cake board and iced it then sprinkled it with crushed graham cracker crumbs to be a small island.  I iced the cake board with blue tinted icing to look like water.  My sister had bought 2 sets of small Jake and the Neverland Pirates figures so I placed Hook on the island and the crocodile beside the island.  I let my nephew decide where to put Jake, Cubby and Izzy.  It took about 7 hours from start to finish but it turned out pretty well.  My nephew seemed happy. 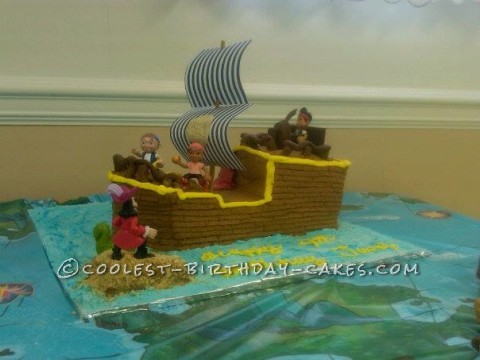