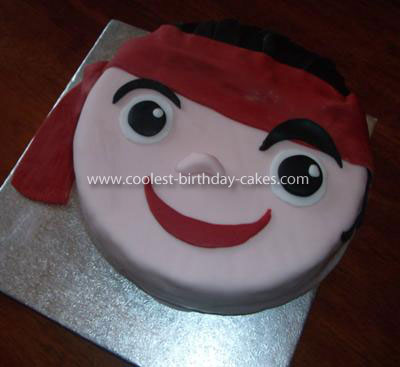 I was asked to make a birthday cake for my friend’s sons 4th birthday. He is a big fan of Jake and the Neverland Pirates so I said I’d see what I could do! As usual I checked the coolest-birthday-cakes website to see what I could do but couldn’t see anything suitable which was a surprise because ‘coolest-birthday-cakes.com hasn’t let me down before! As always I had left my preparations too late so spent an evening trying to think of how I could make a cool birthday cake for a four year old boy. I then remembered that a couple of years ago I’d made my son a pirate cake so using the basic idea of that and the Disney Jake and the Neverland Pirates website I made this cake!

The cake itself is a basic Victoria sponge recipe which I stuck together with blue butter icing, one portion of butter icing was enough to sandwich the cake together and stick the top layer of icing down.

When the cake was sandwiched together and on a cake board I covered it with royal icing. I bought a 500g block of white icing, took some off to use for the whites of Jakes eyes then mised the rest with red food colouring to make a pink/peachy skin colour. I then covered the whole cake with it. Next I rolled out some black for Jake’s hair and covered the top part of the cake with it. I cut some curl and strands or hair shapes from the black to try and achieve the quiff look and stuck them to the black background. I then added the band of red for Jake’s headband/bandanna. This was a fairly wide strip of red icing which went from one side of Jake’s head across and then down at the side. I added a lump of red icing so it looked like the bandanna had been knotted on.

The last thing to do was to add Jake’s features. While I was doing this I consulted the Disney website so that it looked as much like Jake as possible.

If it had been for one of my children I would have added gold plastic coins to the cakeboard to look like dubloons, sadly the cake had to be transported quite a distance so I was unable to do that.

The Jake and the Neverland Pirates Birthday Cake was a big success, so much so that I was asked to make another one.