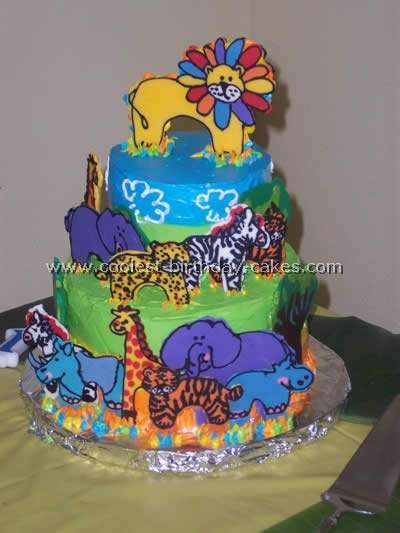 This is the jungle cake I made for my son’s first birthday party. I got the design from the Whimsical Bake house cookbook and also used their recipes. It was all chocolate cake with cookies and cream filling.

The filling was the best part – it’s just sweetened whipped cream with crushed up oreo’s in it – delicious! I also made a tiny 6-inch smash cake for my son and it was a huge success – I will continue to make a separate small cake for him until he’s a bit older.

The animals on the jungle cake are made out of melting chocolate (or candy discs) colored with candy colors. They took a really long time to make but making them about 7 weeks before the party really cut down on the prep time. Make sure if you try the candy decorations that you pipe them really thick – some of mine were so thin that when I pulled them off of the waxed paper they bent or cracked.

We used a recipe out of the 2007 Wilton Yearbook for our jungle cake. We made the palm trees out of pretzel rods and construction paper, the “water” out of blue gel icing and brown sugar for the “sand”. It was a big hit at the party everyone loved it!

For my son’s 3rd birthday we had an animal jungle/zoo theme. We used Zoo Pals plates and cutlery made a Jungle cake and Zoo juice boxes. All other decorations we animal themed and each child had a different animal box filled with zoo themed goodies to take home.

The Jungle cake is just a plain white cake with vanilla frosting dyed green. The water is blue decorating gel and the dirt is crumbled digestive biscuits. Pretzel sticks make up the fence and Lego and Fisher Price animals are the decorations. What an easy way to make children smile.

The elephant & tiger for this jungle cake is one cake mix split into 2 round pans. The tiger ears are cupcakes. The trunk is the part cut out between the ears.

The jungle cake is iced with store icing tinted with gel. The elephant is decorated with rope licorice. The monkey ears are cookie crisp cereal. The frog’s eyes are mini marshmallows moistened by rolling on a wet paper towel and then rolling in green sugar and add a dot of black icing. A five year old helped me do the eyes and ears!

My son wanted a jungle cake for his 5th Birthday I made two round chocolate cakes. Once they were cool I cut one cake in a smaller circle than the other and placed it on top of the bigger cake (tiered).

I made butter icing and tinted it green. I then iced the whole jungle cake green and then piped stars around the bottom of both cakes. I gathered up several jungle animals (I washed them in hot water and dried them) and placed them around the cake. I then used jelly snakes and a large jelly python and placed them around the cakes. I made banana trees with a Kit-Kat piece placed vertically and then three lolly banana were placed at the top of the Kite-Kat to form branches. I also placed Smarties here and there to fill in the jungle cake.

My son just loved it! I got lots of comments at his party everyone was very impressed.

This jungle cake was made from 3 oval pans stacked then one small oval on top. All the animals are fondant. The waterfall is colored piping gel.

My Daughter was going through a Tarzan/Dumbo phase and she wanted animals for her 3rd B-Day. I kept looking at other pictures of cakes and finally decided to come up with my own idea; I created a jungle cake. I used fondant for the covering, I dyed the fondant the colors that I wanted. I used a tier set for the top cake and used white icing colored green for the grass around the cake., , I was so worried that it wasn’t going to come out the way that I wanted but I think that it came out better.

I made the candy following the recipe and instructions from The Whimsical Bakehouse cookbook. I used chocolate cake and cookies-n-cream filling for one cake and a vanilla cake with custard and strawberries for the other layer. It was a lot of work to have so many colors but I made the candy about a month ahead of time so that helped.

A teacher at my son’s school wanted a simple animal theme cake for her 2 year-old boy. The animals are toys, and I decided to make a scene for them: hippo in the water, lion behind the bush, and giraffe under the tree. The other animals went around the cake.

Read Angela’s “Party-Tale”: The story behind the cake…

I cut the letter out with letter cookie cutters. The top 2 tiers are chocolate cake and the bottom is a white cake. The frosting is butter cream. It was a huge hit and my 3-year-old twins loved it!

This jungle cake was a Neapolitan cake. The top layer was white cake and the second was strawberry. Chocolate frosting was in the center. I mixed green food coloring gel into white frosting for the grass and blue for the water. The edges were frosted with green, blue and purple. Little jungle animals finished off the scene.