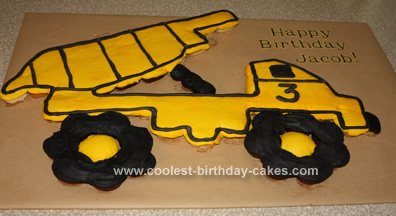 My son wanted a dump truck cake for his construction party for his 3rd birthday. My husband works for CAT designing large mining dump trucks and my son thinks that is the coolest thing in the world. So I wanted to give him the birthday party that he wanted, and this was the first year that he was able to decide what type of party he wanted.

I spent hours searching the web for ideas for a Dump Truck cCake. I found a ton of 3D cakes that were really cool, but I just didn’t think my cake making ability was up to that standard just yet. I noticed that cupcake cakes were a big thing. SO why not make a 2D dump truck out of cupcakes? How hard could that be? And with cupcakes I could make it to look like the bed of the truck was dumping. I have some square silicone cupcake holders and thought they would be perfect to help me get a boxy look for the cab and bed.

I set out with my cricut machine and started cutting squares and circles the size of cupcakes. I then layed them out on the table to to construct my dump truck. My husband then had to come and put his expert touches on the design. By doing this I also knew how many cupcakes that I would need to bake. I cut a few of the square ones into triangles for the windshield and back of the truck bed. I used a homemade buttercream icing. I put a dot of icing on the bottom of each cupcake to help hold it in place. I then swirled a glob of icing on each cupcake and then spread them all together. I used 3 mini cupcakes to make the hydraulic. I then just piped the black around the edges and put a 3 on the door for my son’s age.

It was super easy and fun to do. I then cleaned a couple of my son’s dump trucks and used them to put these peanut cluster things from Sam’s club in for snacking. I also made some big signs out of cardboard that read “3 Year Old Zone, Enter at Own Risk” and “Caution Birthday Ahead” to decorate the walk to our front door, along with some orange construction cones and construction tape.

It was a great party. And my son still talks about his dump truck cake.

This dump truck cake was made for my son’s 4th birthday using ideas picked up from this site.

It’s made from two 2lb loaf Madeira cakes. I turned one upside down to make the base and iced it using yellow fondant icing. I cut a third off the other cake and turned it upside down to make the cab. I then cut a rectangular hole in the remaining piece of cake to make the back of the truck. Tip – don’t make the hole too deep as it makes the sides of the cake weak and it only needs to be deep enough to hold a few of what ever you decide to fill it with to give the illusion that it is full. I then iced the cab and back in yellow icing.

I covered two wafer biscuits with the yellow fondant and built up the cake, putting the covered biscuits behind the cab to prop up the back at an angle. I made number plates with my son’s name and age on in advance from flower paste with edible pen writing and glued them in place. I used licorice for the bumpers and licorice allsorts for the rear lights and white choc buttons for the front lights. Licorice Catherine wheels made the wheels, glued on with edible icing.

I made a windscreen and side windows from white fondant and drew a little man driving on the windscreen. A sweet made the exhaust and I filled the back with chocolate raisin “rocks”. Demerara sugar made the sand on the tray to complete the look.

I found this Tonka Truck Birthday Cake a little time consuming with getting the icing on but well worth the effort. I started with 3 large rectangle cakes and then cut them into the Tonka truck shape. I actually cooked the cake mix in a roasting pans as I could not find a cake tin large enough for the effect I wanted. I used a butter cake mix.

For the tip tray, I rested the cake on a piece of cardboard wrapped in foil and secured it to the “truck” base with 2 kebab sticks. I cut them off and covered them with the icing when the time came (remember they are there for serving). I also rested the truck base on a rectangle piece of foam wrapped in foil so that it appeared suspended off the ground and so the wheels would look like wheels. The wheels were rolled liquorice straps and the rocks in the back of the tilt tray were honeycomb.

I used a butter icing (yellow and what was meant to be black but turned out a metallic silvercolor). I used icing pens to write the TONKA on after I had iced.

This is the Dumptruck Birthday Cake I made for a friend’s sons first birthday. I carved the cake and put it on a raised board so it looked like the tires which were made from ricecrispies treats and covered in fondant were off the ground.
I finished the cake with fondant accents and put a small round cake in the bed for her son to eat all on his own.

Cool Dump Truck Cake by Kimberly B. from Columbus, Ohio

For this Dump Truck Cake I baked two cake mixes in loaf pans and cooled. I placed one cake upside down (to give it a lifted appearance). I cut off a piece of the second cake to form the cab and placed it atop the first, adhering with frosting. I also cut off another, much smaller piece and placed it just behind the cabin (this will help the bed look lifted).

Then I frosted all of this yellow. Using the remaining piece of cake, I sculpted the bed, hollowing out the center just a little bit. Prefrost portions of the bed before placing onto the cake. Finish frosting the bed and fill with chocolate rocks. Attach chocolate donuts for wheels, orange m&m’s for lights, black licorice for grill and decorating gel for windows.