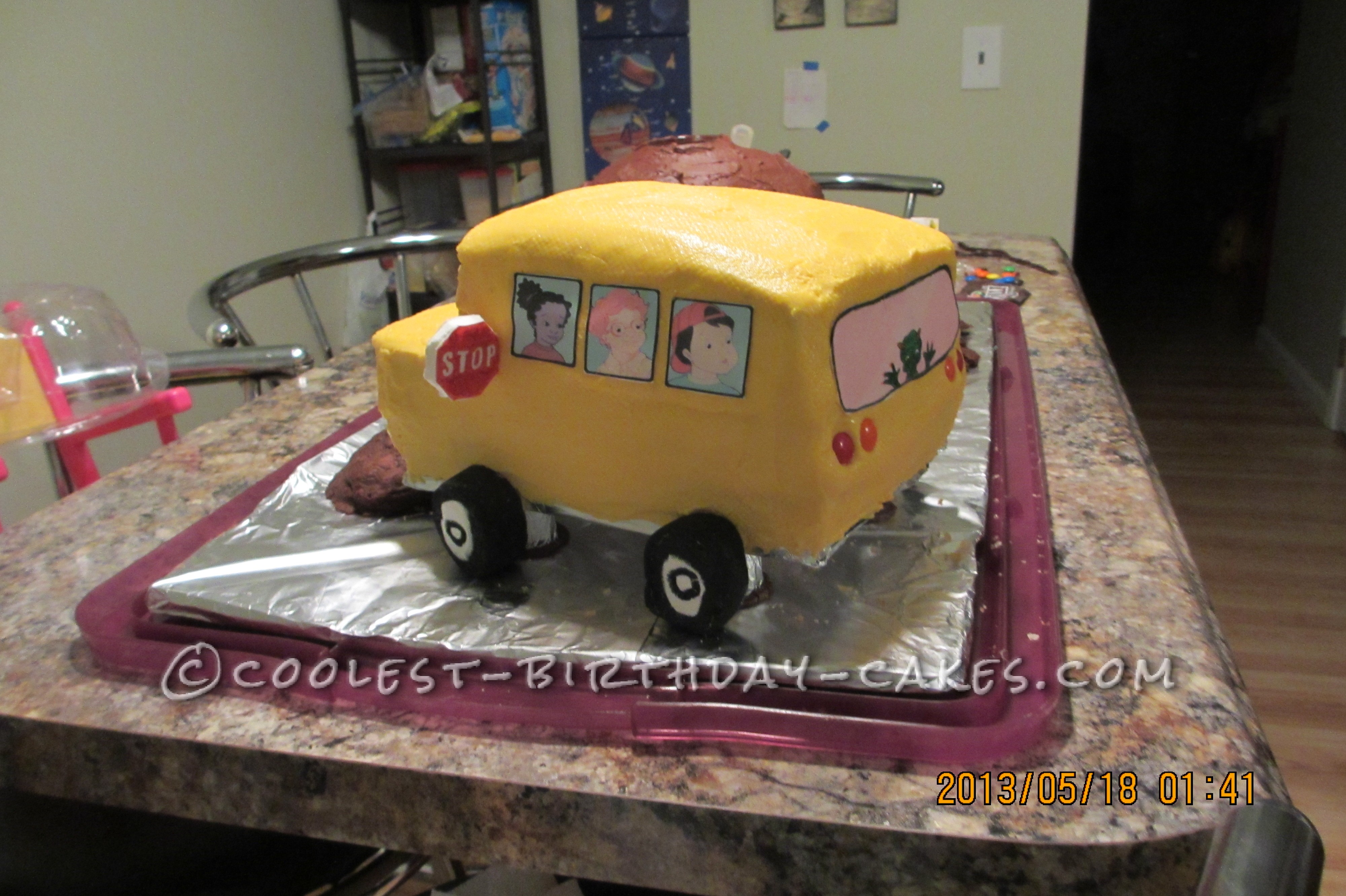 My daughter wanted a Magic School Bus party and thankfully, the Magic House, in St. Louis was having that as one of it’s traveling exhibits. My daughter was turning 5 and also likes volcanoes so it was obvious that we would use that volcano episode for it’s theme. The volcano cake was simpler by surfing around the internet for ideas. The bus was more difficult since I wanted it uniquely hers.

Volcano Cake: I used two bundt pans and one 8″ x 8″ square and a lot of chocolate icing. Found a tall, narrow glass to hold the dry ice to serve as the smoke from the volcano. Just pile the bundt cakes on top of each other and then cut out the top with the square cake until it covers the glass and ice the whole thing.

Bus: I took a screen shot of all the characters and then in paint, I made windows of the characters. There was probably an easier way, but I just “erased” all the excess in blue around each character and then made a black outline of a window. I bought a printer that uses edible ink and it took a while to figure out that the white was the side that needed the ink and not the clear side! I made three 9″ x 13″ cakes and then split one of them to serve as the top of the bus.

I wrapped a book and four spools to support the bus so it would not be on the base. The wheels were the big (fireside) marshmallows but in half and using black, edible ink, colored in. The stop sign is also made more 3D by using a marshmallow and stop sign pictures on both sides (inserted via a toothpick). I read to make sure you put icing between the layers so that the cake does not slip on each other.

The grill was chocolate licorice cut (no, you cannot separate the strands like with red licorice) into four pieces. My daughter picked out sour gummy worms for the lines on top of the cake and colored M&M’s served as the lights. She also picked out larger sprinkles to put all around the cake (I had intended to use the printer to print cool shapes for the bus but reality hit at 1am and my friend and I were spending way too much time discussing how yellow the yellow needed to be for the cake!).

Island: I had baked chocolate, chocolate chip cookies too for a friend and noticed that the bus to volcano seemed non-cohesive so decided to use the cookies as part of the island and just stacked them on top of each other using the chocolate icing to keep them in place. The palm trees were pretzel sticks dipped in icing and green coconut.

My daughter and friends loved the mist coming out of the volcano (the mist is safe to touch, no touching the dry ice with bare hands though or you will get frostbite!). 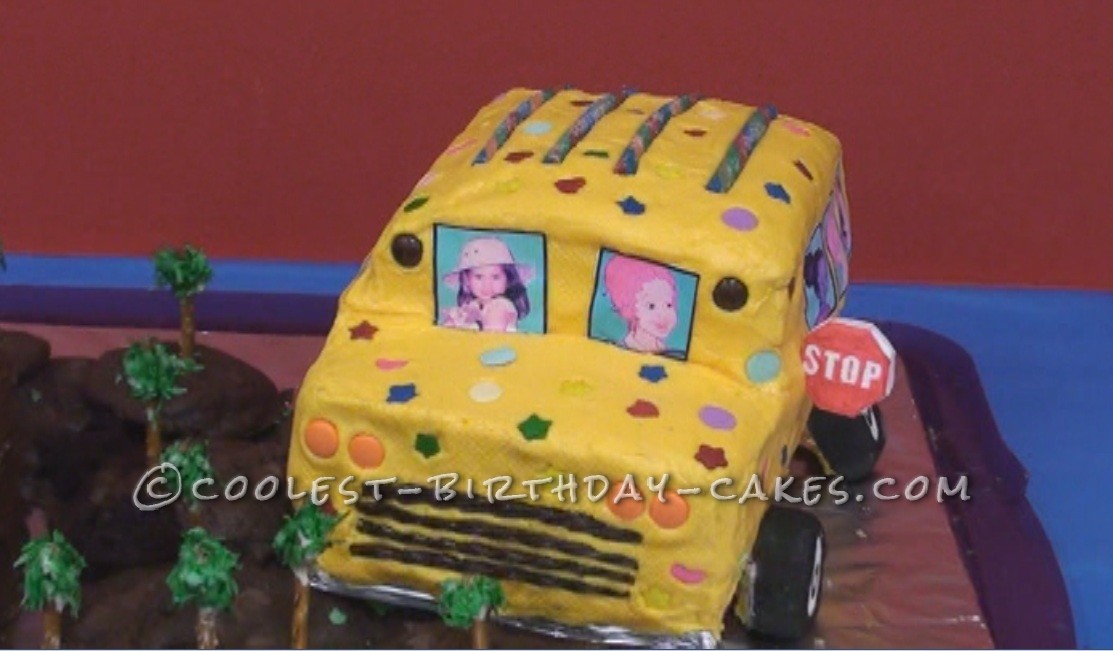 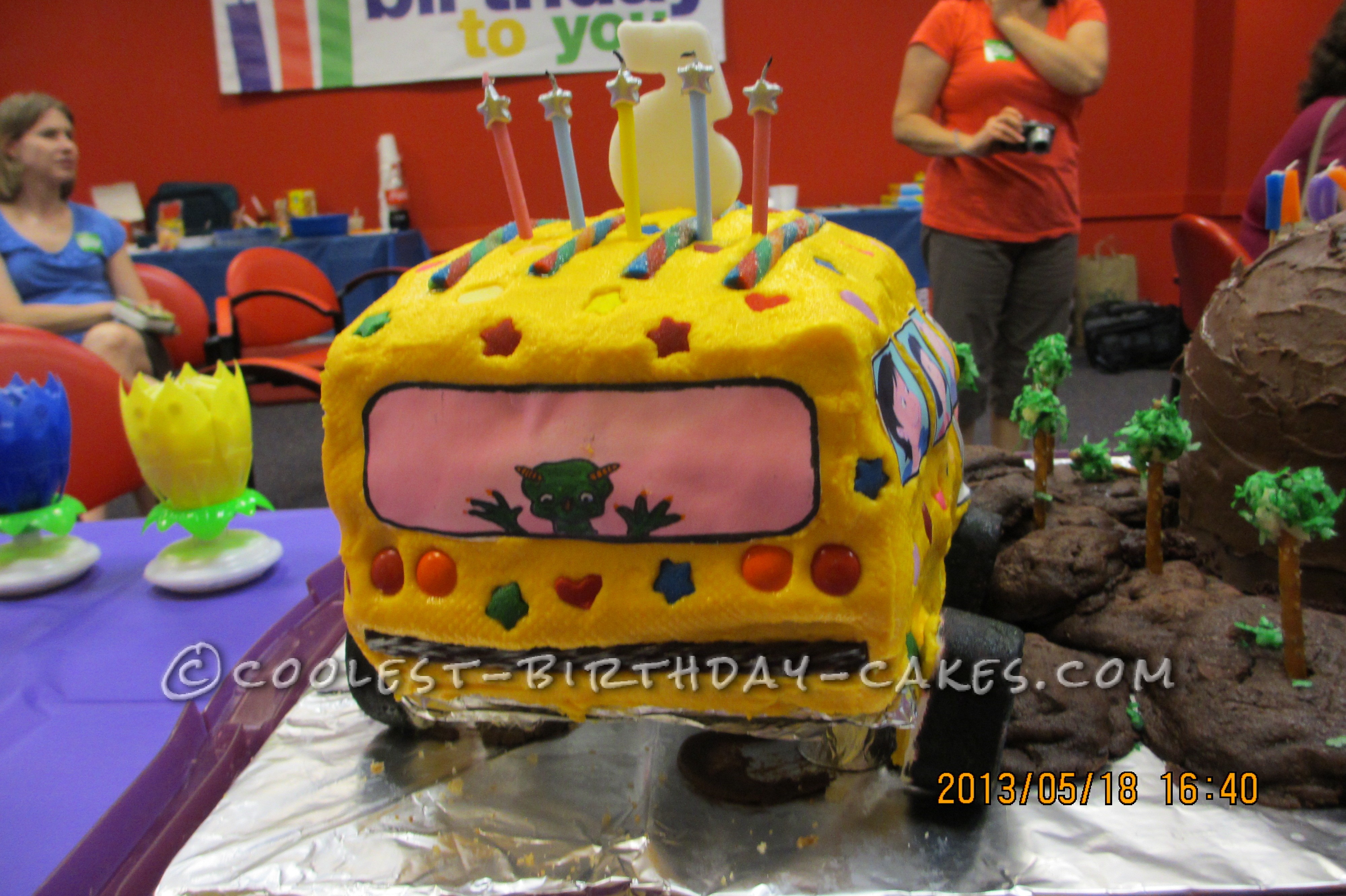 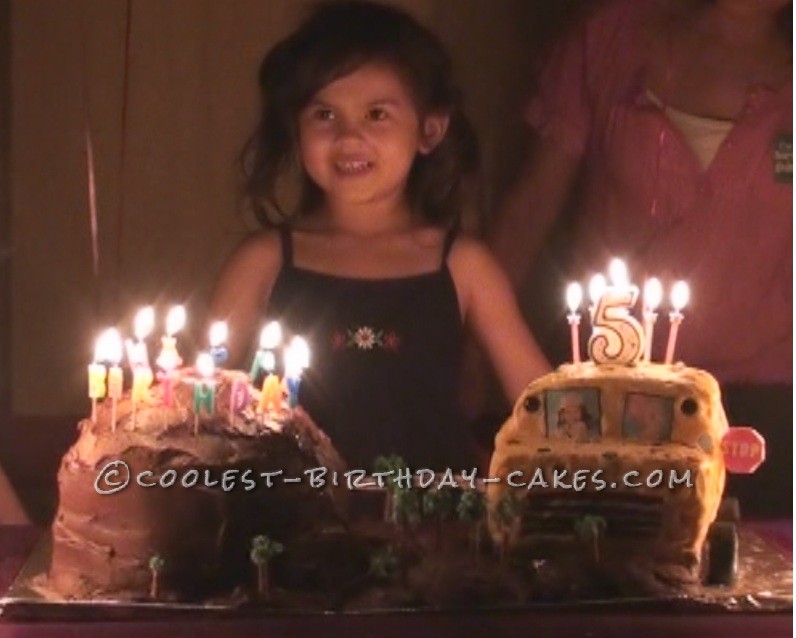