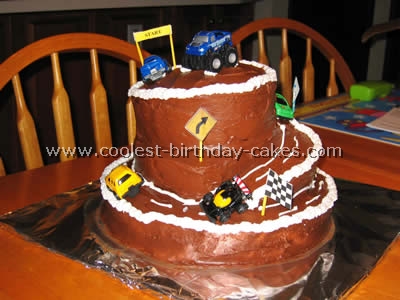 I browsed through many NASCAR birthday cakes and this has been by far my most favorite cake to make. It was a three-tier homemade butter pound cake. I knew when making a tiered cake it had to be something solid that could hold the cake layers and the added icing.

I used a 10” round cake on the bottom and two 8” round cakes on the top. I cut the top layer down to about 5” and then cut away the side to make it look like the cars were coming down a mountain. I then went to Microsoft Clipart, found some realistic street signs and glued them to toothpicks. This cake weighed about 5 pounds when it was finished! It was great fun. The 5 year old loved it!

I got the idea for this cake off of this website from all the other Nascar birthday cakes. The original was by Tracy G. and was for a second birthday. I converted her idea to work for a third birthday.

I followed her directions doing the black number three first and then filling in with the green.

I used road signs and trees from one of my son’s play sets and ‘glued’ them to the cake board using icing. My mom was a big help on this cake – if you could list it as by Jen G. and Nancy J. that would be great.

Thanks so much for maintaining this website and all these Nascar birthday cakes, I’ve been really enjoying it.

I made two 8-inch round cakes, put them side by side, iced them black, then used a grass tip to make the grass, added some cars and made some flags out of toothpicks and labels.

I baked four 9-inch round cakes. When they were cooled I stacked two cakes together with buttercream in between and formed a figure eight. I then used buttercream frosting to make the number two on top of the cakes.

While the buttercream was still wet I put black sprinkles on it for the road. I then added white lines down the center of the road. Then I set to work on the grass area. I had forgotten to buy the grass tip so I just used a large star tip and started filling in the remaining area.

I wanted to write happy birthday on the cake so I smoothed one area of the grass and used a round tip to pipe it in. To finish this birthday cake recipe, I printed road signs and buildings off the computer. I attached a toothpick to the back of each one with clear tape and placed them around the cake to look like a town. The last things I added were some trees and the cars on the road.

I was very happy with the finished cake. It was a huge hit at the party and my son loved it.

For my son’s first birthday party we decided to have a racing theme party. First I found a cake tin that was in the shape of a racecar. They also had the edible decals so that it would look like a real NASCAR. I always make sure to have 3 separate kids birthday cakes at the party so that there is enough cake to go around (just the car wasn’t going to be enough).

I put the car on top of a round cake plate and used the columns to put it into the cake underneath. The bottom kids birthday cakes are two 13X9 pan cakes frosted with green icing. I left a figure 8 circle white and used the black spray to spray it black.

I got some other cars we had to put on the racetrack and inserted the checkered flags into the cake to complete it. I also used the green glitter flakes on the grass to give it a little more dimension to it. I also put green stars around the top car.

These NASCAR birthday cakes were a lot of fun to make and everyone enjoyed it. No one even thought they could eat the car cake.

For this Grand Prix Cake I bought a large rectangular cake already iced from my party shop. Using a large sheet of paper the same size as the cake I drew a number 2 and then cut that out to shape, and placed it on top of the cake. Then I was able to cut the shape of the 2 out of the cake with a cake knife (I ran the knife under hot water first to make cutting through the icing easier).

I made the “START” and “FINISH” signs on the computer using Microsoft word: I printed them out and used lollipop sticks to hold them up. The chocolate grand prix cars were bought from “David Jones” dept store. The green strands around the edges were hard to find but if I was doing it again I would just use coconut and green food colouring.

The red and white edging on the track is a Monster Python jelly I found in our party shop. The base that the cake is on is 3mm plastic I got at my local sign writer and he did the text and everything for me.

Thanks for all the cool NASCAR birthday cakes on this site!

I began by looking on internet for a race car picture and ideas. I saw several different race track cakes, and began with that basic design.

I had to make an extra long cake board, by cutting 11×13 in half and taping on to another 11×13 (two layers of boards were used). I covered the cake board with vinyl race checkered tablecloth. The race track is made with 9×13 cake and a 9″round cake. The round is cut in half; one half is added to each end of 9×13 and secured with icing.

I inserted white mint lifesavers as an inner track tire barrier and iced the outside of the cake green with green grass ( Wilton tip 233) and green cake sparkles.

This is a 10 inch round, cut for a sixth birthday, and made into a racetrack.

I made two 8″ round NASCAR birthday cakes, one chocolate and one white (Duncan Hines seems to be the best) and placed them side by side. I made an extra cake to get two 3×3 inch squares then sliced them diagonally and placed them in the corners b/w the 2 round cakes (to complete the figure 8).

One batch of chocolate butter cream icing with black coloring (I used a whole container of black powder coloring to one batch of icing) went on the top of both kids birthday cakes and for the checkered pattern I used tip 21 and alternated black/white for checkered pattern. One batch of white butter cream icing was used for red – red, leaf green, yellow, and white. The rest was time and creativity.

My son picked the ‘hot wheels’ theme from a book for his third birthday. So out of all the NASCAR birthday cakes, I made this cake for him to go with that theme, although it ended up as more of a racing theme than actually hot wheels in the end.

The cake is a chocolate layer cake I made from a recipe that I love. The frosting is butter creme. I would suggest though, pick a color besides red, the amount of color needed to create a more pure red distorts the taste of the butter creme; same with the color black. To make the black start with a chocolate base and you will get a black color with much less coloring.

It was a really fun party! It’s fun creating these types of kids birthday cakes! A car for every year, the cars were also candles.

We had a cars and trucks theme for my son Jax’s 2nd Birthday! I looked for kids birthday cakes online and found this idea. The cake I found was two round cake pans and it had a race track on it which looked like a figure eight. I decided to shape the road like a two since it was my son’s second birthday.

I used two 13 inch round pans and shaved a little cake off of the ends and put them together to look like an eight. Then I spread out a number two onto the cake in buttercream frosting. I then iced the rest of the cake with green buttercream frosting using the grass tip. I used black sugar sprinkles to cover the number two on the cake. This was much easier than using black frosting plus it glistened a little bit!

I then put white lines of frosting inside the two to make it look like an actual road. I just used a tip that you would use for writing to make the white lines. I don’t know if any of you have tried to write Happy Birthday on top of grass icing but it’s really difficult unless you can use a large tip to write with. In this case I could not, so I just printed “Happy Birthday Jax” on cardstock using the Joker font. Then I cut it out with some jagged scissors and laid it on top of the cake.

You can’t see them on this picture but I used two little spiral candles on each side of the name. Finally, I placed miniature cars I purchased from a party supply store on top of the two.

Everyone loved this cake and it goes great with a car theme. These type of kids birthday cakes are simple to make, your little boy will love it!

Here’s a Race Car Track Cake that my husband and I made for my son’s 3rd birthday on June 14th.  He loves race cars so we came up with this cake.  It could easily be transformed to NASCAR or Hot wheels, we used a mini race car set with red, white, and checkered flags that came in a set at our local store.

To make the cake I used one 9 inch round cake and one 13×9 inch cake (we made each in different flavors).  Once the cake is baked and cooled, the edges and tops were trimmed and the round cake was cut in half.  The 9×13 was also trimmed so that the 1/2 round pieces would fit on the ends evenly.

The race track was made by frosting with brown/chocolate frosting and the “infield” was frosted with green colored vanilla frosting for grass and then sprinkled with green sugar crystals. The peppermint lifesavers were cut in half and added as the inside rail/tire fence.  Frosting was added to outside edges of cakes and graham cracker sticks were added for the fence.  We then added finishing touches including the mini race car set and flags.

It’s one of those birthday cake recipes that’s great for the entire family. My 4 children loved being able to help with this cake.