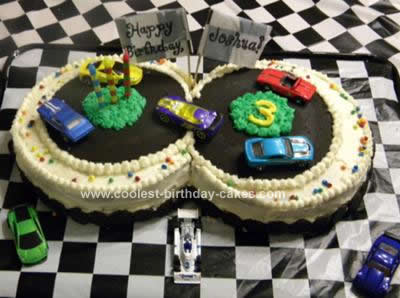 My three-year-old wanted a race car themed party, so I began an online search of birthday cakes. I came upon this website, among a couple of others, and I decided to borrow a few ideas, as well as incorporate some of my own for this Homemade Race Car Track Cake.

I thought it would be cool to do a “checkered flag” cake, so I bought a checkered cake kit from a crafts store, and I baked four 9 inch round (vanilla and chocolate) cakes using the kit. If you choose to bake a checkered cake, I’d suggest making a cake from scratch rather than using a cake mix…just a little info I discovered while researching. After the cakes had cooled, I put a little icing on the top of two of the cakes, stacked each cake with another (following the instructions of the kit) and then cut a small niche out of one stack so that I could nestle the second cake stack into it and create a “figure 8” shape.

Next I decorated my cake using white buttercream icing. I first put a skim-coat on to hide the crumbs, and I then put a second coat of frosting on. I decided I didn’t want to use store-bought black frosting, and I didn’t have the food coloring to create my own black icing, so I bought two pre-made Oreo pie crusts and cut the sides away with a sharp knife. I carefully transferred the round crust bottoms to the center of each cake and slid them together until they touched. I scraped away any excess crumbs and outlined the “asphalt” track with my buttercream icing, using a star tip decorating tool to give it a finished look. I also put a star-tipped border around the top edges of each round cake.

I then used a “grass” decorating tip to put two green circles in the center of the track. Originally, I also put yellow “lines” for the lanes of the track, but then decided it looked more realistic without them, so I scraped them off. I added newly purchased Hot Wheels cars to the track, sprinkled candy-coated mini-chocolate chips on the outside of the track for a splash of color, and also put mini Oreos (separated) around the bottom, using a little dab of icing to keep them in place. I cut a piece of a store-bought plastic tablecloth to fit inside a purchased plastic cake carrier from our local grocery store, taped it to the bottom of the carrier, slid the cake on top, and added a couple of extra cars outside the track. I also used the tablecloth to cut out “Happy Birthday” flags for my son, put in colorful checkered candles on one patch of grass, and piped the number three on the other grass patch.

Each child got to take a car from the cake, and we served it alongside Breyer’s chocolate and vanilla checkered ice cream. It was a hit! 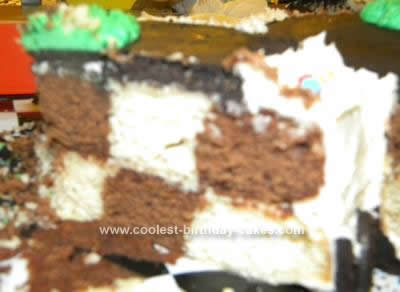