I usually like to get ideas from other cakes, but this time there weren’t very many drive in theater cakes to look at….so I had to come up with my own ideas!   The theme of the party was “movie star/red carpet event” for a 7 year old girl.  Activities included face painting, lots of games, a photo booth, and finally, a “drive in movie” on the big screen outside in the yard—each child sitting in their own cardboard box car which they decorated.  That is why I chose to make a Drive In Theater birthday cake.

The bottom layer is chocolate.  The top layer is Lemon.  The Cupcakes are Sweet and Salty Popcorn cupcakes.  The Rock Formations are marshmallow fondant covered Rice Krispie Treats.

I off-set the 2 layers to give the cake more dimension.  It was well supported because we had to transport it quite a distance.  Each layer is covered with grass-green homemade marshmallow fondant.  I used real cars for the birthday girl to give away to some of her friends at the party.  The screen is made from black-core foam board.  It could be made from ginger bread cookie dough or no-spread sugar cookie dough, but I chose to use the foam board because it was lighter in weight and also because I didn’t want there to be too many leftovers.  The screen features my granddaughter.

I froze the rice krispie treats and carved them to the right shapes…..then covered them fondant.  I made a little tool out of wire (using needle nose pliers) to emboss the fondant.   The signs were printed on card stock, toothpicks taped to the back, and stuck in the rock formations.  The cars were held in place with toothpicks.

The speakers for each car are licorice candies.  I heated a nail on a burner to pierce a hold in each one, then used toothpicks to hold them in the cake.  The toothpicks were painted with black food coloring.

The cupcake wrappers were printed off  the internet from a link I found on Pinterest.  The cake was vanilla cake, with vanilla frosting……topped with Movie Theater Butter popcorn…which made a great sweet and salty taste that I got several compliments on.

After the cake was all assembled, I added grass, using green buttercream and a decorating tip, and tiny flowers that I cut out of fondant……and chocolate rocks. 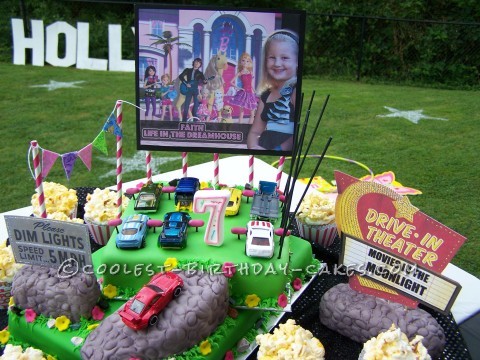 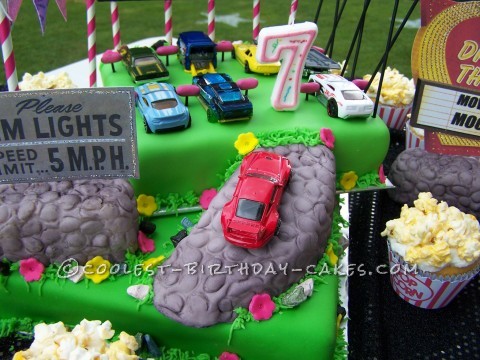 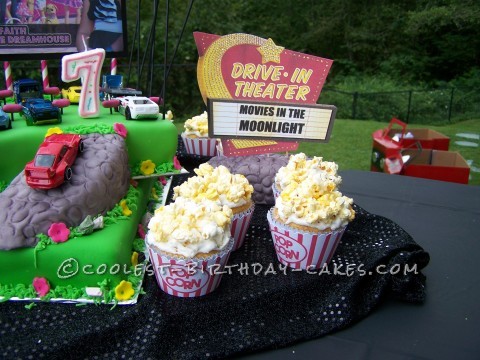