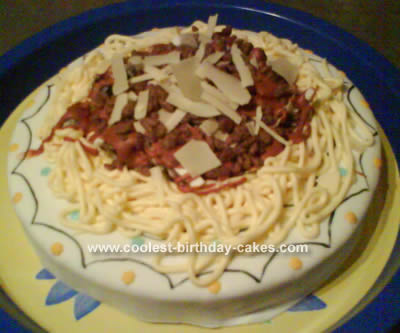 I scoured pictures of birthday cakes on this site for inspiration and came up with this cake. I love making plate cakes as they are easy to do. This cake was made for my daughter-in-law who loves spaghetti Bolognese. All you need is a round cake for the base, fondant icing to cover (glazed icing rice krispies) for sauce and white chocolate shavings for the cheese looking topping.

I looked at many pictures of birthday cakes until I came up with this spaghetti cake. Noodles were made with tinted buttercream icing using tip #5. Meatballs were left over cake scraps made into balls by using coffee creamer to make them a tad moist so they would stick together. Sauce was made using strawberry preserves mixed with buttercream icing and tinted with a tad of brown (I used a real jar of sauce as my inspiration for color). I shaved white chocolate for grated cheese.

I saw this spaghetti cake in a magazine while looking at pictures of birthday cakes. It came out great. I have been making it ever since with my own tweaks. I used a cake mix, two 9″ round pans, then cut off the ends and made an oval and put it on an oval tray.

I used the white confetti cake for fun. The meatballs are chocolate home made truffles, the sauce is strawberry preserves, the icing is piped through a pastry bag and is white buttercream homemade frosting. The parmesan is grated white chocolate morsels. It is always a hit and tastes delicious too!

My niece is a spaghetti-aholic. For her 10th birthday she decided that she would have all of her favorite things at the party. I found pictures of birthday cakes on this website and amongst others a spaghetti cake, though changed it up a bit.

I made two 9 inch round layers and iced them smooth with buttercream. I then slipped them into an actual Calphalon pan. I used a round tip to create long strands of buttercream that looked like the pasta. I tinted the buttercream with a little bit of yellow to get the pasta color. I used Cocoa Rice Crispy Treats as giant meatballs on top. The red icing was store-bought buttercream tinted with A LOT of red food color and thinned to a pouring consistency with milk. It tasted delicious and my niece absolutely loved it!

Mix ingredients as box suggests. Have a cookie sheet covered in wax paper to the side. Place bag of “crust” into a small bowl. Roll the Oreo mix into balls. Then roll them in the crust covering the outside of each ball. Place on the cookie sheet. I made 10 meatballs (6 kids with a few extras – make sure you have enough for the childs name if you are going to do what I did). The remaining mix was placed in the cake after I sliced in horizontally.

I tinted butter cream icing with a bit of yellow. You are trying to achieve the look of noodles. First cover the entire cake and use the icing to help create the volcano shape if you used the ball pan. When complete using a line tip go around and around and around as well as in and out – like you are weaving. Pause once and awhile to make sure you are getting a “noodle” look – not too perfect but a bit tangled in appearance.

The red sauce is 1/2 cup red seedless jelly heated and mixed with 1 tbsp. of corn syrup. I added small amount of orange Wilton’s coloring to achieve a more “tomato sauce” color. Do not poor over the cake hot – you will melt your noodles. Let cool a bit and then pour it over the cake.

I spelled my son’s name on the meatballs he has a short name. It was a cute cake that tasted very good.

My neighbor wanted a cake for his brother and after asking him a few questions on his brother, I proposed him this cake. I wanted to do this cake for a while!!! The cake mold is a big cone (the same used for the 3D doll cakes). Then, you cover the entire cake-using tip #133 (the hairy tip); you pour some strawberry jam on top, and put 3-4 chocolate tidbits. That is how you have this wonderful spaghetti plate!

This was a 9×13 rum cake baked in an oval pan. I covered it with butter cream ‘spaghetti’ and red/orange butter cream ‘sauce’. The ‘meatballs’ are rum balls.