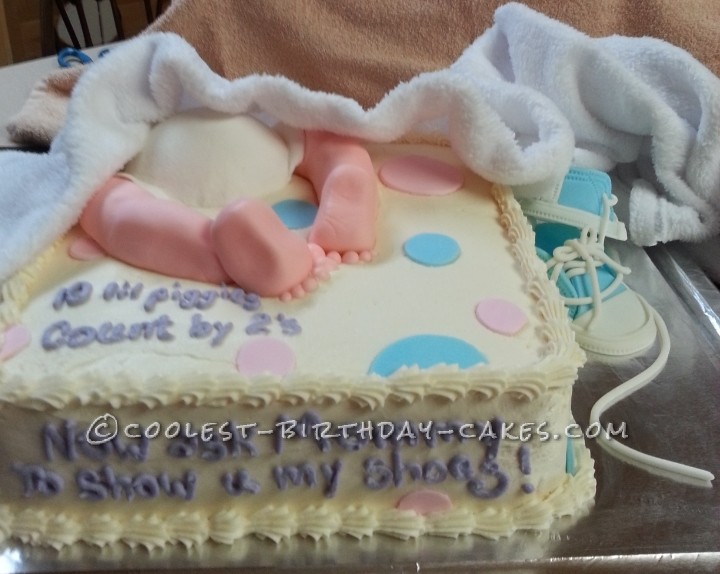 When you find out you are going to have a sweet little angel to call your own, you want to shout it!! I consider a baby a true gift from God. A miracle….straight from heaven.

When you tell everyone you are expecting it seems as though they light up….as if a little bit of your happiness washes over them too.

It amazes me these days how much technology has advanced. You can see who’s coming before he/she ever gets here….and finding out is so exciting…

I did a reveal cake for a sweet friend a while back. She works with my daughter and they wanted to reveal it to everyone at their workplace.

The cake was topped with a baby’s behind I crafted from rice krispies and covered in fondant to look like a diaper. The legs, feet (I adore baby feet) and tiny toes I also formed from fondant. A real white throw was used for the “cover up”

As I didn’t know what the baby’s gender was yet, I made not one…but two pair of fondant baby tennis shoes! I had to make them in advance so they would have time to set. The shoe strings were also fondant I made using my handy little clay extruder…cool deal…check one out!

The party was planned for the day after the doctor’s appointment so I already had the cake made, complete with pink as well as blue polka dots. The day L found out and told me the “secret” I was beyond excited and happy for her …I will not fib….my daughter tried very hard to get a hint out of me….but my lips were sealed!!

A blanket hid the shoeswhich would indicate the gender until the reveal. The blanket was held up with toothpicks and barely touched the cake. It laid on the cake board and came around and covered the shoes.

The cake held the saying….” 10 lil piggees..count by 2’s,  Now ask mommy to show you my shoes.”   And at that point she lifted the blanket to reveal that her angel baby was a boy…a sweet sweet boy! Love you little peanut! 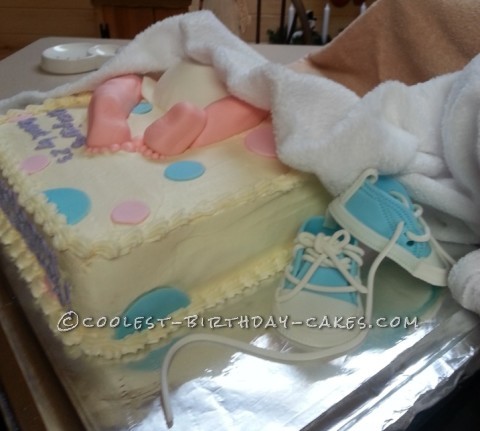 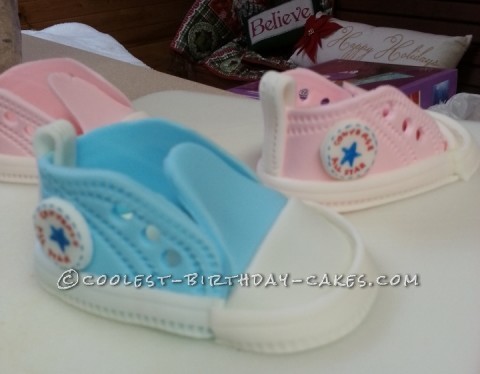