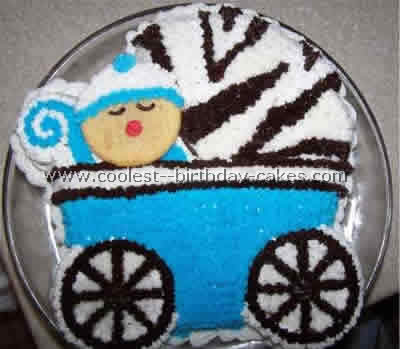 I made this cake for one of my best friends’ baby showers. The theme for the nursery was baby blue with all kinds of animal prints. I wanted the baby shower cake designs in the same theme. I searched and found a baby stroller cake pan at Hobby Lobby and used that! The cake was a white mix and I added Vanilla pudding mix to the cake mixture to make it moister!

The icing was buttercream and I used store bought chocolate icing for the black. I did the base of the stroller in blue and the hood in Zebra print. I made sugar cookies for the party and used one of them for the baby’s face. I put a little baby bonnet on the cookie so the face didn’t look so big on the stroller! Everyone has raved about this cake and loves it!

This cake was created to mimic a Wilton pan that I decided I did not need to purchase. Instead I used two eight-inch rounds to create the “Pac-Man” shaped of the buggy. I trimmed a little out of the middle to create the “handle”. The wheels are one cupcake cut in half through the center.

I made this cake for a baby shower using store bought cake mix and frosting and used fondant for the polka-dots and facial features for the bay’s face. The baby’s face is a cupcake and the stroller I used a round cake pan.

Thanks to this website, where I found many ideas for baby shower cake designs!

My daughter is expecting a baby and I said I know how to make a few baby shower cake designs, so I chose one for the shower. I got the idea for the carriage cake off of the Internet. I had never done the basket weave before and as you can see it wasn’t done correctly but it turned out okay. I have since learned how.

My mom made these baby shower cake designs for my baby shower by using the Wilton baby carriage pan. Someone had already started cutting into the cake when we realized we hadn’t gotten a picture of it!

This cake was made by using one 12″ round cake pan and two 6″ round pans. Cut 1/4 piece out for the carriage and use it for the handle. Frost the entire cake with white icing and decorate using different tips; basket weave tip, star tip, and flower tip. This is one of those great and original baby shower cake designs.

My daughters and I made this cute cake for my friend’s baby shower. As you can see from the photos we had a lot of fun decorating. We made this fun cake from two boxes of Funfetti cake mix. I died one batch pink and one batch blue using Wilton gel food colors.

Each batch was used to fill a 10″ in cake pan. One I left whole for the main part of the buggy and the other I used my daughter’s formula can as a template for the wheels. I bought white, pink, and blue icing from the bakery department of my local super market.

I started out with a crumb coat in white, followed up with the basket weave in blue and finished it off with some details using the star tip. I was really simple to make and was a hit at the party.

This cake was made for a baby shower. It is covered in butter cream icing. I used the Wilton football pan for the headboard because I wanted that round effect. I made chocolate candies and put them on the bassinet. This cake was really heavy but every one loved it!

This baby shower cake was so much fun. The name cake is a single layer oval, the bassinet is double layer oval. Both cakes were iced, and then covered with basket weave pattern.

The teddy bear face was piped on the name cake with two different color browns. I covered the top of the bassinet baby shower cake with basket weave and ruffles using a ruffle tip. For the baby, I piped body shape and face, then used star tip (bag filled with white and blue icing to get color variation in blanket) to make blanket over the baby. I then piped little fingers over the top edge of the blanket.

My carriage cake started with a homemade cake recipe for vanilla cupcakes. They were baked in the Wilton small egg pan. Preparing the carriage, using 1 egg shaped cake and a half of another. I attached the half cake on the top of the whole cake and covered with star tip and beads around the edge.

I added round chocolate disks for wheels and then a flower in the center. I then topped with a chocolate baby (this picture doesn’t have the baby on the top).

This bassinet baby cake was made for a friend’s baby shower. This baby cake will take a little time, but be patient the end results will make it worth it!

You will need to make two 9×13 cakes, and one 9 inch round cake. I used a pound cake recipe. Make sure the cakes cool completely.

Ice the second cake a little bit on the side you are going to place the cake halves. (This icing is your glue for the top part of the bassinet.) Now, cut the 9inch cake in half. Be sure both cake halves are equal. Place icing on one side of the cake half. Stack the other half on top of it. Pick up the halves and place them on the top of the 9×13 cakes. Ice the cakes just a little bit, not heavily since you will be covering the cake with the basket weave technique.

The only place you will heavily ice the cake will be on top of the 9×13 cake and the front of the halved cake where you will make the pillow.

Now place basket weave on the sides, the back, and on top of the halved cake. Before adding border, you may want to make your pillow using buttercream icing. I used tip #16 to make zig zags. Then place the baby where you would like it. Once the baby is on the cake, use tip #21 to make shells for the blanket. I went in an angle. Once you make the blanket, add the border around the cake. I used a rope border.

I made the bows from tip #104. Once you are finished, you may add a baby toy. I used a rattle. I bought the baby and rattle at a cake supply store. When I bought the baby it did not come with a bow, so I added one since my friend was having a girl. Since the rattles came in a pack of 6, I removed one of the ribbons to add to the baby’s head. To get it to stick, I used buttercream icing as my glue.