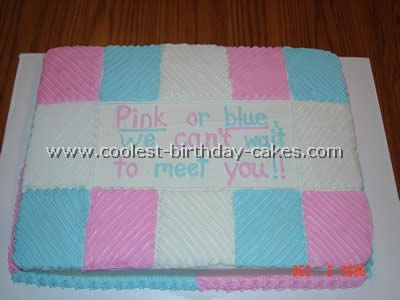 I made this baby shower cake for a friend’s baby shower. I divided the cake into “quilt blocks” and then used a star tip to cover each block at a diagonal. I rotated the diagonals on each block to give the cake the appearance of the texture of a nice soft baby blanket. I love the look that this technique creates.

I made this cake for my cousin’s 2nd baby shower in August 2006. It is a decorator’s fondant and a butter cake inside. The baby on top is icing as well and it is hand cut, no mold cutters or templates.

This baby shower cake was adapted from several I saw for generic shower cakes since the couple did not know what they were having.

I used buttercream for the frosting fondant cutouts for the buttons clothes and blanket. I used a simple sugar and water mold for the basket and frosted it with a basket weave pattern.

Cake by Maria B., Oakdale, PA

The person I made this cake for wanted Eeyore and pink and purple polka dots. So in thinking about Eeyore and friends, flowers and grass came to mind.

Since it was for a baby and she wanted to have the name on the cake I thought it would be cute to add baby blocks with the baby’s name on it.

This was my first all fondant covered cake so it was a little difficult rolling fondant onto a 13×18 sheet cake.

Next time I will use a cake board to slide the fondant off of and on to the baby shower cake.

I also added a little touch of edible sparkles on the bottom ribbon of the cake, to some of the flowers and to the pink round cake that Eeyore sits on.

I used a 9×13 rectangular mold for this baby shower cake. Then frost with buttercream frosting. I frosted in all white, and then made the lines by lightly pressing a ruler to make the squares. Then just cover the lines by filling them with the colored frosting to make like a quilt., The small round cake is a 6-inch round cake. They are both 3″ deep. I drew the animals from the baby shower invite.

The baby style decorations are made from candy melts.  To do this, melt candy and let it harden in the freezer for a few minutes.  Use cookie cutters to cut out shapes.

The layers of this baby shower cake are both covered in fondant, with fondant stars and lettering. The bottoms of the pillars are clouds of butter cream. I bought the ornament on top, a baby keepsake box, for $2, and the baby ornament cost $1 at the local dollar store.

The hanging stars are 2 layers of fondant with a ribbon between them, left to dry until hard, then tied to popsicle sticks and inserted in the baby shower cake to make a gorgeous mobile.

This baby cake is very simple to make. I just made a circle for the head and added details and blocks simply with buttercream icing or gel.

I added little candy melt baby mold chocolates around it.

A great cake for welcoming a new baby!

The mom-to-be didn’t know the sex of the baby, so I chose to make this baby cake in neutral colors. I got the idea for this cake on a website.

I had a little reserve of white buttercream and dolloped the clouds on with a large, round tip and placed the stars on top. Finally, I molded an angel out of fondant and placed it on the top of the baby cake.

This baby cake was baked for a co-worker’s baby shower. I baked it in a shaped pan and used alphabet cookie cutters to form the words. The couple didn’t want to know the baby’s sex so it was a generic cake. The small decorations and sprinkles were bought at a local hobby store. This baby cake was very easy and fast.