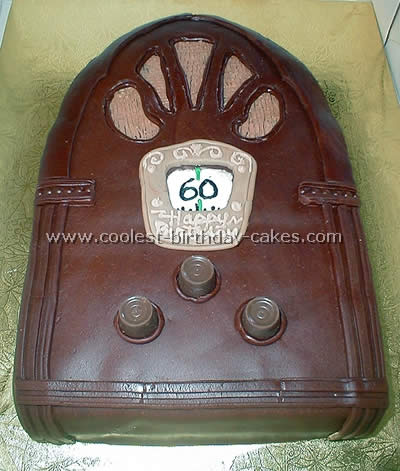 This is my first attempt at a decorated cake and it was made for my father’s 60th birthday party. He collects and repairs antique radios and also hosts an “Old Time” radio show on a local community radio station. The whole radio cake took a total of about 10 hours to make including making the fondant but I’m sure someone with cake decorating experience could pull it off in much less time.

I went against everything I read and made the cake from a (gasp!) yellow cake mix. Next time I won’t do that though, I think the texture of a boxed mix isn’t dense enough for a cake like this. I made it out of a 9″ square cake with 1″ cut off one end (to make a 9″ x 8″ piece) plus a 9″ round cake cut in half and trimmed to make it more pointy. I only split the cake into two layers and frosted in between with mocha buttercream and a little bit of raspberry jam. The buttercream tasted pretty good but I think I let the butter get too warm when I made it and it wasn’t the right consistency.

The outside of the radio cake is covered with chocolate marshmallow fondant. Even with the cocoa in the fondant I had to add a lot of brown food coloring into it to get it to be that deep brown color. There also ended up being quite a bit of shortening added into the fondant in order to keep it from sticking. The fondant ended up tasting kind of like a soft Tootsie Roll – not bad! One thing I was kind of disappointed about was that I tried tinting one half of the fondant a slightly lighter brown color than the other half and then marbling them to achieve a wood grain effect. It would have looked really cool but I ended up having to re-roll the fondant several times to get it on top of the cake without tearing it and in the process I lost that marbled effect.

I cut out the speaker and dial windows with a clean Xacto blade. Not sure if that’s standard cake decorating procedure but it worked! The columns and beads on the sides and the bottom were made with a Wilton fondant embosser/cutter tool (it rolls on a wheel). The speakers were made with a toothpick dragged criss-cross through buttercream. The three dials are (you guessed it!) Rolo candies. I found that the details like the Rolos and the speaker windows looked a little neater if I put a skinny strip of rolled fondant around them.

For someone with more experience or courage this radio cake would look pretty neat if you could tip it up to be a more sculptural cake (so that it would look like a real cathedral radio). It ended up with some flaws but it was a lot of fun to make and I’m pretty proud of the way it came out!