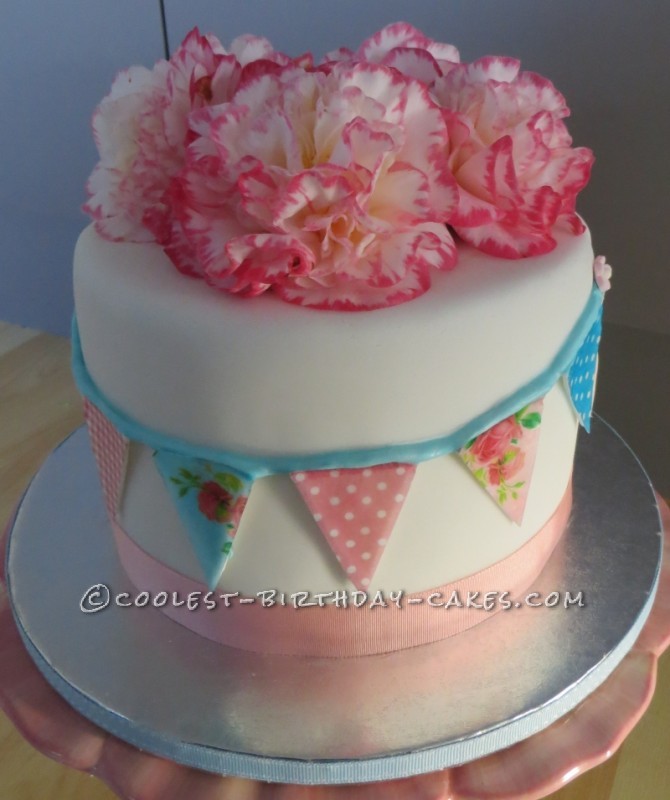 I have wanted to try something like this for a long time, but getting edible ink rice paper in the right designs is impossible in this country. Thankfully Jo from Sweet Whimsey in Wellington (shop on “Felt”) came to my rescue and printed out some beautiful designs for me to use.. It’s easy to cut out the triangles, you just get a template off the internet to use and cut out with sharp, clean scissors. I made this cake for a friend who wanted it for a 50th birthday party. My first paid job – unfortunately after a few dramas, I think I got paid $10 for 8 hrs work!

I used sugar water to paste the images on to thin triangles of fondant. Her recommendation is clear piping gel and I think that would be better, as the paper kind of warped a little and became brittle – very easy to break corners off if they hang over the edge of the fondant triangle.

I used Annabel Langbein’s Ultimate Chocolate Cake recipe and made the 2 smaller cakes, and her chocolate ganache (although I halved the ingredients of the ganache and still had leftovers). The ganache needs to be chilled for 1 1/2 hrs with the occasional stir, so that it sets firmer to use as a filling. You can heat it up in the microwave a little to use for the crumb coating. You have to be quite careful with this cake though as it’s easy to knock edges off! I wished I’d used a white choc ganache instead for the crumb coating, some got on the fondant and looked terrible until I covered it over with the bunting flags.

I had big dramas with laying the fondant and went through 3 packs of it! It kept drying out and cracking (I used cornflour to dust the work surface). Icing sugar worked better but it wasn’t perfect. I think I need some non stick work mat or something.

To attach the flags, you use royal icing as glue. Before gluing down I used a piece of silver string and pinned them to the cake how I wanted them to fall with clean pins (see pic). This is where the icing string then goes afterwards. So I stuck all the bunting flags around the string, removed the string and used royal icing to pipe the edible string. I wished so much for a fondant extractor gun (not cheap) as I really am not happy with the royal icing, it was so difficult to make it look straight and nice.

Last of all, I attached a ribbon around the base with a pin at the back to fix it, then cut a small round of wax paper and placed camellia’s from my friends garden on top. Camellia’s will only last the night, but that’s fine. I also attached blue ribbon around the cake board with double sided tape.

I wanted to cover the cake board with fondant but I’d run out by the end given all the dramas! 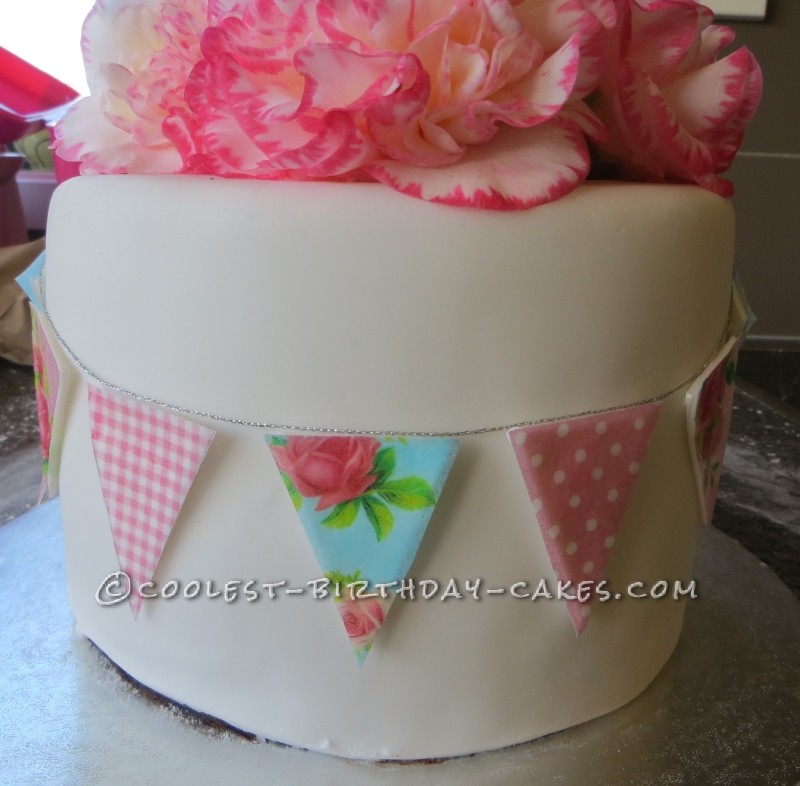