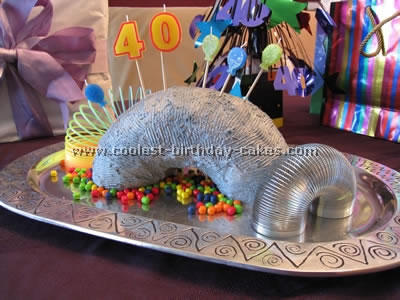 My husband collects slinkies so this was the perfect cake for him. But it’d also be good with some “retro” toys around it for someone born during its heyday. It was actually pretty simple to make.

I baked a regular cake recipe in a bundt pan. Then cut the cake in half to make two semi-circles. Spread some butter cream (I just made one recipe of butter cream) on one half then stick them together. Stand up on their cut ends. Ice with the remainder of the frosting. Get the frosting as smooth as possible then take a (clean!) comb and run it over to get the lines.

The hardest part was achieving a silver color without resorting to fondant (which nobody likes to actually eat!). First I put a few drops of black into my butter cream to achieve a gray color. Then after I had iced and combed the cake I left it for a few hours to form a bit of a crust. Then I took edible silver powder (intended for fondant) and brushed it lightly on top of the cake. I’m sure it’s easier to brush on fondant and you probably get a stronger silver color but this worked well enough and still tasted very good.