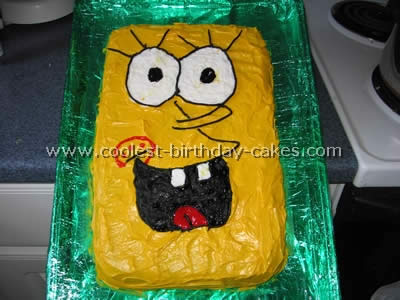 For my son’s 2nd birthday I used his “of the year obsession” Sponge Bob! It is easy enough to make. I used a 9×13 pan, vanilla cake mix and vanilla icing dyed yellow with food coloring. The face is made up of white, red and black icing. I tried the gel icing but it was hard to use. My son loved his cake!

It was a Spongebob Squarepants cake request for the 3rd birthday of my youngest grandson Andrew. I wasn’t given much notice so it was a challenge but I went onto your website and got a lot of ideas.

I made all the features legs arms and attire out of fondant. Toothpicks were put in the arms to push into the cake. I used a large pretzel covered in fondant for the nose leaving additional length for pushing into the cake.

I used a Styrofoam egg cut in half squared off and covered in fondant for the shoes adding toothpicks on both ends of the legs to attach to shoes and into the cake. Keep all in a covered container until ready to put on the cake. The pants legs and shirt arms were small doughnuts.

I baked a chocolate marble 9” x 13” cake. I prefer Duncan Hines cake mixes and always set the oven temperature at 315 degrees so that the cake center will rise flat and even with the sides. I cut at an angle down the sides slightly to the pants to make the top slightly wider than the bottom. I put wax paper back into the original pan and covered very well and froze the cake. It is easier to ice cakes especially cut edges when frozen.

My husband cut a plywood board big enough for this Sponge bob and it was covered with self-adhesive white shelf paper. I used a can of store bought chocolate icing thinned a little for the pants and my regular recipe of frosting for the rest of the cake. I iced the white shirt first then the pants then the yellow head. I used a #5 round tip to go around the top and bottom borders of the cake in yellow to make the edges of the sponge. The doughnuts were messy to ice. I held the doughnut and put a lot of icing on then lay against the cake and finished smoothing out the icing. I put on all the fondant arms legs and all the features.

The belt and eyelashes were added in black the cheek dots in red. I practiced different ways of making those sponge holes and just decided to wet my thumb/finger and smoothed out a hole then took some blue icing on my thumb and swirled it in the holes. The name was added on the board in a #3 round tip. Everyone loved Sponge bob!

I baked the Spongebob cake in a 9 x 13 pan. I used a Betty Crocker cake mix and white Wilton buttercream icing and marshmallow cookies for his shoes.

Just a rectangular cake trimmed at an angle for this sponge bob cake. I used HoHos for feet and the tops of the legs. Arms and legs are pretzel rods. Hands are from the scraps cut off the sides. Icing is store bought tinted with gels.

I baked this sponge bob cake for my nephews 3rd birthday and needless to say he was thrilled with it. This cake was baked in a standard rectangular cake pan. I cut off about an inch wide slice off the bottom of the cake which would later be used for the hands, feet and nose of the sponge bob cake.

Food coloring was used to make the 2 yellows on Sponge bobs body. Nutella (chocolate and hazelnut spread) was used to frost the shorts. Blue gumball cut in half for the eyes. Chocolate sprinkles were used for his eye lashes and the outline of the shirt collar. -Red fruit roll up used for the tie. Chocolate cookie squares used for the shoes.

I got the idea for this Sponge Bob cake from this website. People couldn’t believe that this wasn’t store bought but it really wasn’t that difficult. I used 2 cake mixes and had a 10×14 pan for the body and a 9×13, which I cut to make the sleeves and the pant legs. The arm legs and shoes are just frosting. Frosting it took the longest; I just used store bought vanilla frosting and tinted it with food coloring.

I made this Sponge Bob cake for a friend’s son. It was the first time I tried to create Sponge Bob! Was terrific! I used licorice sweets to make the outlines. It’s faster and not messy to use marshmallows for the spots on his face.

I used a simple 9”x13” sheet cake pan. My 4-year-old granddaughter wanted a “purple Sponge Bob cake” so he has purple shorts on. In looking at pictures of Sponge Bob I decided straws would make perfect arms and legs.

The cake was pretty simple and everyone loved it.

Cake by Jackie A., Louisville, KY

For my Sponge Bob cake, I used a butter recipe box yellowcake and a cream cheese icing. It’s so easy to decorate with. To get brown pants I added cocoa to the left over yellow icing. I used white fondant and folded in yellow food coloring for arms and legs. I stuck the arms and legs on with sucker sticks.

The shoes: when I tried folding the black color in, of course turned gray so I used black gel food coloring with a little water and painted them. It gave a shiny “leather” look to the shoes. The balloon was also made out of rolled fondant. My cousin’s son loved his Sponge Bob cake.

My sister and I made this Sponge Bob cake for her grandson. We got the idea from your site. We used pound cake loaf for the legs and arms. Swiss rolls for the shoes, peppermint patties covered with icing for the eyes, and banana Laffy Taffy for the nose.

The Sponge Bob cake was a huge hit with the 3-year-old birthday boy!

This Sponge Bob cake was really simple to do. The cake board was covered with white fondant icing which I painted blue with some diluted food colouring to look like the sea and left to dry before I put the cake on.

The Sponge Bob cake was baked in a rectangular tin and covered with fondant icing which I bought already in the colours I needed. I covered 3/4 of the cake with the yellow, then a strip of white with 2 triangles for the collar, a bit of red for the tie were stuck on the top, and a strip of brown was added to finish it off.

The eyes were made from white circles, which were stuck on the face and a bit of blue food colouring. The teeth were made from 2 small rectangles of white icing. I outlined everything with a tiny paintbrush and black food colouring to make it look like a cartoon. Then finally I made a little sausage shape from the yellow icing and stuck the nose on to give it a 3D effect.

I got the idea from the Sponge Bob “tropical” party plates. I wanted to make a special girlie Sponge Bob for my niece.

I used a full sheet board and one white quarter sheet cake and one chocolate cake, trimming off about 2 inches from width of each cake to leave room for his arms. I iced the top 1/2 with a yellow icing and gently placed a plastic cup on icing where I wanted each eye and removed the cup to leave a line to trace and finished his face, whew!

I then iced the bottom with a thin layer of green icing and used a grass tip, starting at the bottom for a good layering effect, lastly adding his sponge spots, flowers, arms and legs with parchment triangles. I used Wilton’s decorator icing, which I find is much easier to use and looks better than homemade or regular canned frosting.