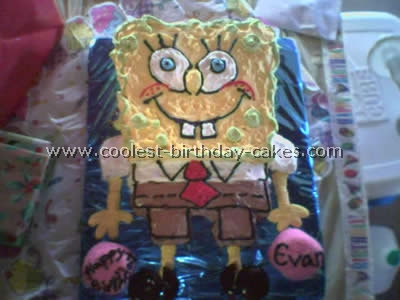 This Spongebob Squarepants was a fun cake to make! I used a full steam table pan and 2 boxes of white cake mix. I used Moist Deluxe but added the whole egg instead of just the whites. I added 1/2 teaspoon each of the following: orange extract flavoring, rum flavoring, Amaretto Flavoring, and butter flavoring; it’s a wonderful combo!

The kids loved it and so did the adults, it sure beats the old run of the mill cakes you buy at the supermarket.

After I baked it I cut the cake in half and used one half for Spongebob Squarepants main body/head. I trimmed a little of each side to taper him. I used part of the other half for the other parts, shirt, pants, and sleeves.

The frosting I used was made with 1 package of Jell-O Instant Vanilla Pudding, 1 cup of milk, and one 8oz container of Cool Whip. You don’t want to make all of the frosting with this recipe, just the parts that aren’t white because it turns a little off white. Then you just frost Spongebob Squarepants and draw his features in. The arms and legs are just frosting.

I used Snackwell’s Devil Food cookies for his shoes, one whole one on each side, and then half of one for the part that goes on the leg. The little sea sponges on the side are the little marshmallow coconut snowballs you buy anywhere.

I wrote the birthday boy’s name and Happy Birthday on those. And that’s about it, all in all it took me about 3 hours to make including baking time. You have to refrigerate it if you use the pudding/cool whip frosting because it will start to melt a little if it gets too warm. Best of luck!

Cake by Brandy B., Weatherford

For this Spongebob Squarepants cake I used three golden cake mixes and homemade buttercream icing. Start off with a large sheet cake. Layer the top half with blue tinted frosting and the bottom with a light brown.

Add the SpongeBob Squarepants cake (Wilton pan) on top and frost as instructed with the exception of the winking eye and the swim trunks. To get the cloud effect on the frosting for the sky, I tore a paper towel along the top in a wavy pattern and used blue spray. Add brown sugar for the “sand” on the beach and detail in some sand dollars or starfish. The surfboard is made from a sugar cookie. I propped the edge into the cake with a pretzel for added support (I wanted to make sure that the entire cake was edible).

Everything on the Spongebob Squarepants cake is edible: His feet are fun-sized Snickers bars; tie is Dots candy; belt is licorice; sponge “spots” are slices of Dots and spice drops; nose is a spice drop; eyes, shirt sleeves and pant legs are marshmallows; arms, legs, socks, tongue, cheek circles and blue parts of eyes are Laffy Taffy; mouth, collar and eye details are Tootsie Roll; teeth are Chiclets.

The body is made of yellow cake so that when you cut into Spongebob Squarepants, his insides are spongy yellow! Laffy Taffy and Tootsie Rolls are easy to mold if you microwave them for just a FEW seconds and use wet hands. No need to use frosting to stick the candy pieces together (just wet them a little). I poked holes in Spongebob’s hands to hold the birthday candles.

To make the face, I printed out a picture of Spongebob Squarepants and enlarged it to the size of the cake I was using; that way I could mold the pieces and place them on the picture to help get the shapes right.

This Spongebob Squarepants cake came out much better than I thought it would, since I never make cakes. I used a 13 x 9 cake pan. I followed some other people’s tips and used pretzel rods for the arms and legs, Yodels for the shirt sleeves and pant legs and Ring Dings for the shoes.

I used some blue tinted icing and put some of the sprinkles that look like glitter for the water. The sea creatures were bought in the cake decorating section of the supermarket. This Spongebob Squarepants cake was a big hit at my twin nieces’ 4th birthday party!

This Spongebob Squarepants cake was prepared in a large rectangular pan. I used boxed cake mix and the icing recipe for snow white buttercream icing from the Wilton cake website.

To make the design, I found a picture of the big face Spongebob Squarepants that my son wanted. He didn’t want the arms and legs for some reason. I found a picture on the internet and changed it to coloring book style with my Photoshop program. I enlarged sections of the picture separately…eyes, mouth, then pants. I taped the sections together and laid them over the cake that had a layer of white icing for the crumb coat.

I cut on the coloring book lines and used a toothpick to make the design in the icing. From there, I basically colored everything in with the stars of colored icing.

It was a big hit! And most importantly, my son loved it!

The night before, I baked two sheet cakes to create some height and carved the sides for the shape. I made a crumb coat using thinned out icing and let it dry and harden overnight. The next morning, I iced the cake in the following steps:

1) Using green icing (a combination of blue, yellow, and a touch of red food colouring) ice the spots and the outline on the top. I piped the outline, but used a knife for the spots. I made the spots smooth with a little water and my fingertip.

2) Ice two large white circles for whites of the eyes.

4) Pipe the outline of the eyes, eyelashes, nose, and mouth shape with black icing.

6) Pipe the outline for the teeth and fill in with white icing.

7) Fill in the yellow using piped stars (I used #27). Use a few more stars on the nose to add dimension.

8) Pipe the outline of the tongue and fill in with red icing. Pipe the cheeks and freckles of Spongebob Squarepants.

This is an easier design for a Spongebob Squarepants Cake. I didn’t use any kind of template, I just copied a picture of him from the Internet and left off things like arms, legs and teeth that might make it more complicated. This is simply a regular sheet cake with Spongebob Squarepants drawn on it. I ended up using a pastry bag to frost the smaller sections, and then smoothing it out with a knife afterwards.

This SpongeBob Squarepants cake was so much fun to make and relatively easy. I used a boxed cake in one sheet pan, little bit of fondant for the arms and legs, and one chocolate roll cut in half for the feet. I cut the cake on the top half to make it look a bit wavy and I cut away at the bottom for the pants. I added some seaweed as embellishments. The kids loved it.

I used white icing with yellow food coloring to make the desired color for the body. It took about 1 and 1/2 containers of frosting. I also used brown obviously for the pants, and black for the belt. Nothing too complicated about that. I chose not to make SpongeBob Squarepants with arms and legs (it just didn’t seem necessary). I just followed the picture to the best of my ability.

It was great fun! I hope you enjoy it too.

Cake by Samantha B., Cleburne, TX

My boyfriend and I decorated this cake for my nephew on the occasion of his 3rd birthday. His favorite cartoon is SpongeBob Squarepants or in translation to Serbian language SundjerBob Kockalone, so we knew that if we made it right he would be overjoyed.

My mother made a classic fruit cake with bananas – pastry made of egg whites and sugar with yellow cream and in the shape of rectangle. We made the face, shirt and SpongeBob Squarepants with this cake (he is standing on the other part of the cake), and arms, legs, shoes with special kind of sugar mass, which we made and colored on our own. We had to go back to our childhood years when we were playing with play-dough. Gary the snail is made that way too. His horns have toothpicks as construction material with bubble gums on top.

We used M&M’s a lot and gummy candy, too. It all came down to our artistic skills and a LOT of patience! We paid attention to every little detail. Oh yes, and SpongeBob Squarepants teeth are Orbit chewing gums and the bottoms of his shoes are biscuits.

I made this Spongebob Squarepants cake for a customer. It was the first Spongebob cake I made and to tell you the truth I was a little worried about how it would turn out. But I got some tips from this site and I went for it!

I used pineapple cake mix. The icing was with Pillsbury white icing (I have my own icing secret but I use Pillsbury in it). I used white icing and just added color. I started by icing the upper part of the cake, which would be his face, with yellow icing, then his shirt with white, and then his pants with brown. His face was easy to draw. His arms and legs were only drawn and filled in with the icing on the foil besides Spongebob Squarepants. It was a challenge, but I think it turned out to be OK!