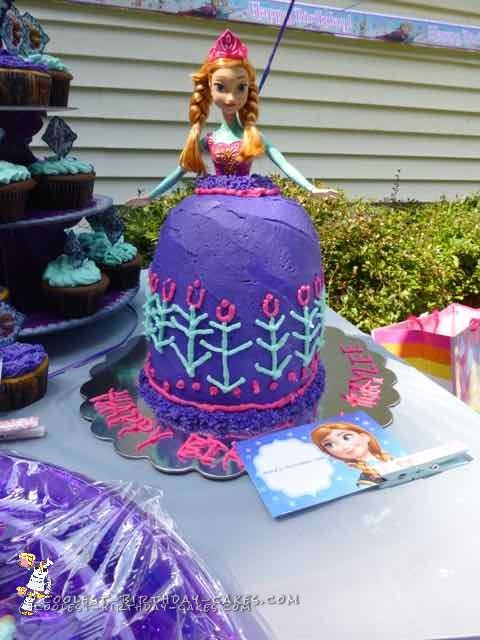 My granddaughter, like every other girl in the world, is in LOVE with Elsa and Anna of of Arendelle!  Kaylee’s 6th birthday was coming up and I had just retired.  She wanted a “Frozen” cake.  I was about to order a 1/4 sheet cake from our local grocery store, same ‘ol, same ‘ol, right!  Then it hit me!  I would ask on Facebook if any of my friends knew of someone who could make me one.  I had seen one with Elsa’s face and her hair wrapped around the cake.  I got the name of a lady, and I went to her Facebook page to see her cakes.  Well then it hit me again!  I could make the cake she had a picture of, which was a “doll” cake.  I can do this!

So, I researched, looked at pictures on the internet, and went in search of what I needed!  Most of the cakes on the internet used an 8 inch pan with a dome top which was a bowl from Pampered Chef.  Well, that looked HUGE to me. When I was in my local craft store that sells Wilton products, I decided on the 6 inch round pans.  I already knew I had a 6 inch Pyrex bowl at home.  I also bought the Wilton gel colors, that were the colors of the dresses Elsa and Anna wear.  I bought a cheap set of piping tools and disposable decorator bags too.

Next, I went in search of Elsa and Anna.  They weren’t hard to find as they are EVERYWHERE!!!  I picked out the ones I wanted and off I went.

Now I had a week before Kaylee’s party, so I started watching Youtube videos and looking up cake recipes.  I printed out two different ones.

I decided to make Elsa a vanilla cake and Anna a chocolate one.  Both recipes used sour cream, but one used more eggs and flour and sugar.  I thought this would be good.  I did a dry run.  It was awful.  It fell apart as soon as I took it out of the pan.  I’m not sure if this was because I doubled up on everything or what.  So I redid it with the other recipe.  I did not double it either.  It was perfect. I dumped the other cake out.

So, 3 days till the party and I am at JoAnn Fabrics when I notice in the Halloween costume fabric this sheer light blue with snowflakes fabric. This would be perfect for Elsa’s cape, which the doll did not have.  (I love to shop, and I love to hunt for ideas and bargains!)

Assembling the Anna and Elsa Cakes

Kaylee LOVED her cakes!  They were a HUGE success and I got a ton of compliments.  They tasted great too.  I really felt proud of myself for taking this on and it warmed my heart to see that smile on my granddaughters face! 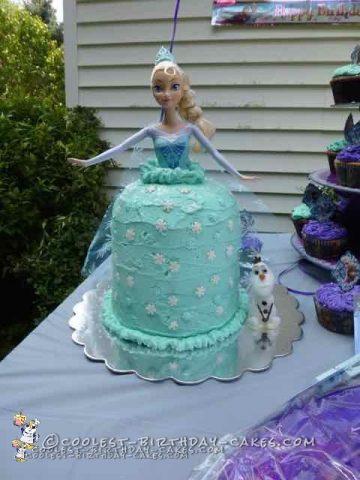 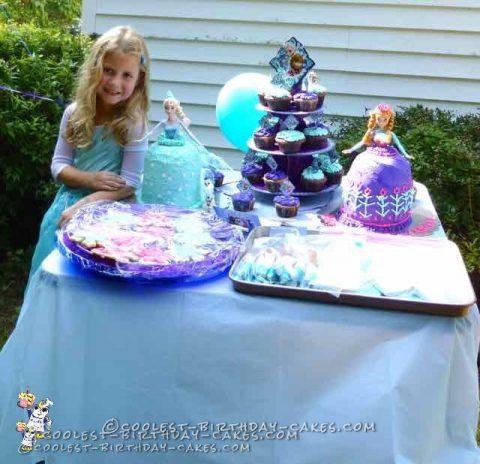