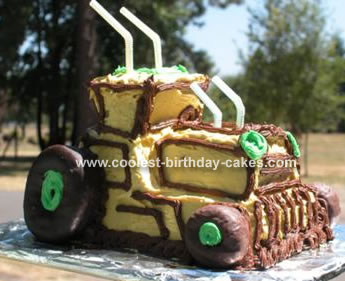 I baked two loaf cakes, and bought some chocolate covered donuts in two sizes. I sawed off the tops of the loaves (the rounded parts) with a serrated knife, and used one loaf for the base of the tractor cake.

I then cut about a third into the next loaf (with a slanted cut) and used it for the back of the 2nd level. I took a thinner piece for the front of the tractor and placed it lengthwise across the front. I cut a slant on the part of the front piece that met with the back piece. I took another piece and stacked it on top. I put frosting between all the levels to assemble the cake once I was happy with the placement and shape of the pieces .

This setup was fairly sturdy, but after it was frosted, I ended up using some bendy straws sticking out the top to stabilize the three levels because we had to transport the cake to the party.

I used the straws cut in one inch lengths stuck into the donuts to attach the donuts to the cake after it was frosted. I used four pieces of straw on the large donuts, and two pieces on the small donuts, and I put some frosting on the sides that met with the cake, just for extra sticking power. Then I frosted around each tire where it met the cake.

I used buttercream frosting, and decided to go with yellow for the tractor because Lewis is pretty into construction vehicles AND tractors, and the yellow looks good with the chocolate donut wheels. I used chocolate frosting (buttercream with about a cup of cocoa powder beaten in) for the details, and green for the accents, including a “2” I put on the roof of the tractor.

I also wrote his name on the back. I just free handed the chocolate detailing: I put a door on each side, defined the windows up top, and then did different lines on the rest of it to make it look tractor-y. 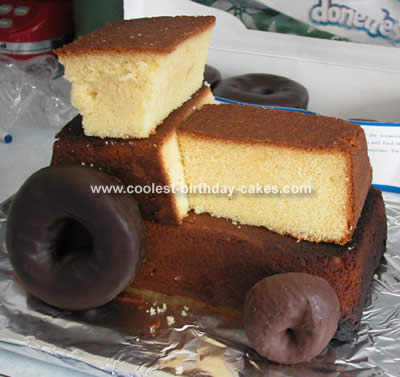