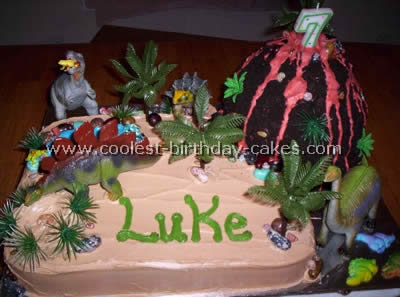 I made this cake for my son’s seventh birthday. The idea for this cake came from my son wanting a dinosaur cake or a volcano cake but couldn’t make up his mind. So I combined both! I researched other ideas for volcano cakes using this incredible site! Thanks for the ideas!

Using a butter recipe cake mix, I baked a large sheet cake. Then I used a Wilton Classic Wonder Mold to bake the “volcano”. I baked an additional round cake layer to go under the Wonder mold cake to get the height I wanted for the volcano and trimmed as needed. I “glued the volcano to the round layer using icing. I cut out the right top corner, iced the side where cake was removed and placed the volcano shape in that corner.

I iced the sheet cake with the desired color of sand (vanilla icing colored using Scooby Doo brown) and then iced the volcano part with chocolate icing. I placed crushed Oreo cookies (centers removed) onto the volcano shape while the icing was still wet (kids helped with this part). Then I placed edible rocks on the volcano sides and bottom along with plastic grasses. I used shortcake cups for the dinosaur nests. I placed smaller edible chocolate candies in the nest as “eggs” with dinosaurs guarding them. The dinosaurs I bought from Wall-mart and washed for the cake.

The water is colored whipped icing smoothed with a damp finger. This make sit dry shiny. Vinyl frogs and edible rocks surround the pond (except the one the Trex got, son’s idea). The “lava” is vanilla icing colored with red and orange Wilton gel color and then heated on the stove until pourable. Once dry it looks shiny. I place the candle in after the “lava” cooled a couple of minutes. It was still soft so it surrounded the candle well. The candle served the fire. Adding other grass, trees and dinosaur sugar candies made this an awesome cake for my son! I placed it on the table with dinosaur paper goods from the local party store and other vinyl dinosaurs from Wall-mart that were “walking around” the cake.

I hope this idea for volcano cakes helps somebody else. 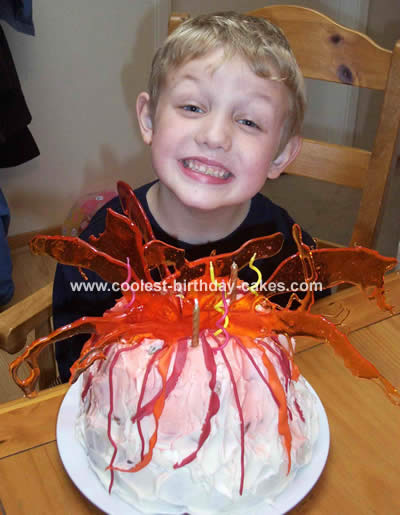 My son really wanted a volcano cake for his fifth birthday. I got the idea from this site for volcano cakes.

I used two bundt cakes stacked and then carved them into the right shape. I used cake cuttings to fill the holes in the bundt. My son wanted a ‘snow covered’ volcano so we poured slightly thin buttercream over the top. I was a little wary of making the ‘lollipop’ lava but it turned out to be very easy.

I made a recipe for lollipops (just Google it) but instead of shaping them I drizzled spoonfuls onto aluminum foil. When they were cool they were the perfect shape for splattering ‘lava’. We peeled them off of the foil and stuck them into the hole left by the bundt shape. While it looked cool in daylight it was truly awesome with lit candles and a darkened room! 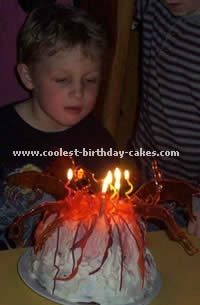 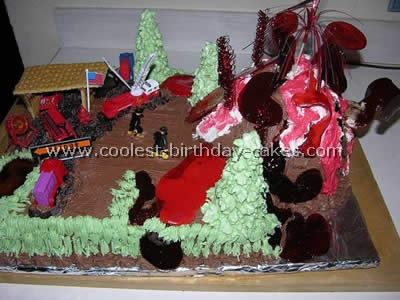 I found many volcano cakes on this site but this is how I made mine. Make a sheet cake, single layer any size, any flavor (I used a chocolate store bought mix and baked as directed). Bake a cake in a metal bowl or “half ball” style pan (again use store bought cake mix). After baking, cooling and setting the sheet cake on a cake board or tray, you may cut it length wise and put in a filling (optional) then place the “bowl shaped” cake touching at the far end of sheet cake.

Frost the entire cake as desired. I used store bought to make it easier. Melt some clear candy in a non stick pan until it becomes molten and pliable (Jolly Ranchers lolly pops etc). Pour it onto greased glass pan, grease your bare fingers then wait a minute or two until it is cool enough to handle. Immediately shape as desired. Let cool, it keeps the shape (I bent one or two pieces of mine to place over the edge and corner of the cake for appearance).

Start frosting some sugar cones in green (to place on cake later as trees). Now frost grass onto the cake as desired. Next use the rest of your cooled and shaped lava candy to stick out of the mountain as if it were exploding. When all the candy is in place, set the trees onto cake and use more frosting to create snow, roads, plants or trails and touch up little details on cake. I also used raisins for effect and graham crackers glued together with frosting to create a fire house. Place store bought figurines and candles on the cake and you’re done. 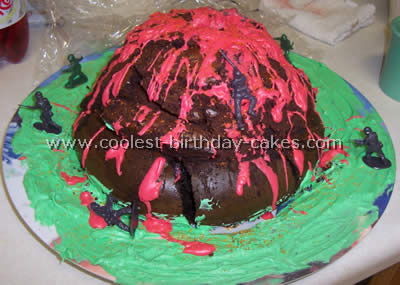 We made this for a science project where you had to make some sort of volcano. Almost everyone was making theirs out of Styrofoam or lampshades. My friend and I came up with the idea to make it out of cake. We had no idea people have already made it. We decided “Oh well what the heck they may have pictures of it on the internet.” We looked up ‘volcano cakes’ and to our surprise there were tons just on this site!