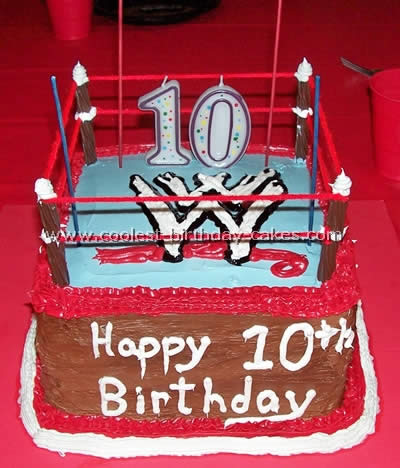 My son is a fan of WWE and I could not find anyone to make him this cake that he wanted for his birthday. My husband and I came up with a plan after seeing other wrestling cakes on this site. It took about four hours to make it look like what he wanted. My son loved it! This was the first time I have ever made a cake like this. And I was really worried about the out come. But it went great! 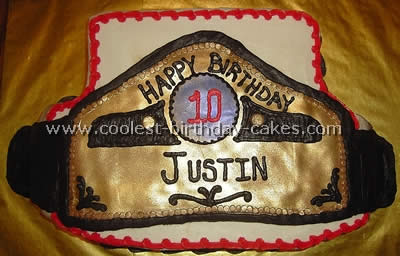 Wrestling cakes? Oh my, yes I can do a wrestling belt! Thank goodness for gold dusting powder! The cake is a 12″ square cake double layer frosted with traditional buttercream. I then took 2″x5″ sections of an 8″x8″ cake I had made and frosted them to the bottom sides so that the belt could “lay” on the cake. Then freehand I cut the ‘gold’ buckle part out of fondant and laid it on the top of the cake. The details of the buckle are also out of fondant.

The edging is small dots cut out using a #12 writing tip and ‘glued’ on using piping gel. The larger circle in the middle was cut from fondant using a glass from the cupboard. The whole buckle was then brushed with gold dusting powder using a makeup brush. The larger circle was then brushed with a navy blue dusting powder to set it off. All the black detail on the buckle as well as the belt itself was done in black buttercream, all freehand. The borders were done using a large star tip.

As a side note not everyone likes to eat the fondant but it decorates so well! Let the party-goers know that it’s okay (and done at weddings) to take the fondant off when cutting. 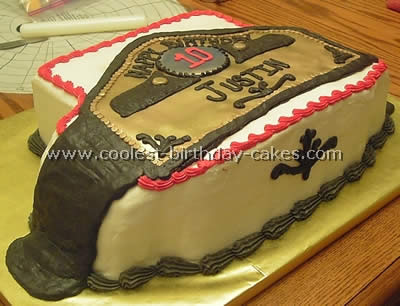 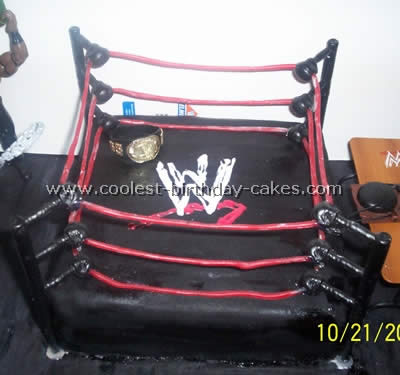 I made three square wrestling cakes, froze them (less crumbs when cutting and carving), cut to desired size, frosted each cake and stacked covered with a homemade fondant you can find the recipe here. It tastes really good, its sweet (store bought fondant has a really unpleasant taste). I tinted the fondant with Wilton’s paste food coloring using liquid colors (tends to make the fondant sticky).

I covered the cake in fondant. My nephew had several wrestling figures and the WWE wrestling ring so I borrowed the two guys and the corner post and table. I used Twizzlers pulled apart for the ropes in between the post, used a writing gel to make the WWE logo and made a food coloring paint with Wilton’s paste colors and vodka (don’t worry the alcohol evaporates!) but it makes a nice sheen to the fondant and it dries quickly so it doesn’t make the fondant sticky or gooey! And when you tint fondant it almost always turns grey rather than black.

Any way really easy to make and I just hot glued the guys feet to the cake board so the stay put! turned out great and my nephew said it was the best cake he ever had! 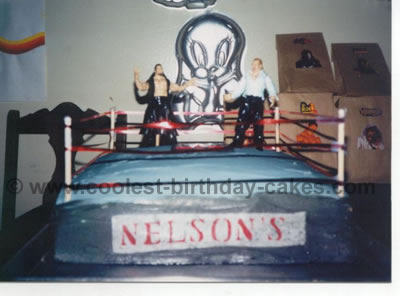 This birthday cake is covered in colored frosting and the sides were pieces of “wafer paper” and non-toxic pens.

The wafer paper is just thin wafer stuff. You can draw anything on it, trim it and then with a spray bottle mist the area for it to stick.

Skewers were used for the edges and ribbon for the ring. I added my son’s toys to look real.