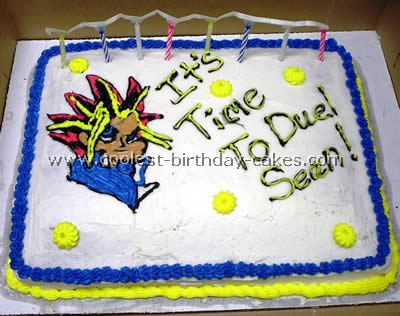 For my son’s 8th birthday we had the honor of having his party at our local toy store. The store was having a Yugioh dueling day so I went with the theme and made a Yugioh character cake.

For the cake I always use Duncan Hines. It seems to be the moistest on the market. For frosting: 2 lbs fine powered sugar, two sticks butter, 2 tsp. vanilla and heavy whipping cream. Blend the sugar and butter until it looks like cornmeal. Add vanilla and then cream until you get a desired consistency.

After frosting the Yugioh character cake smooth I took a toothpick (while the frosting was still moist) and drew an outline of Yugioh’s face. This is a neat little secret I just came up with. If I messed up the outline I would wet my finger with a little bit of water and smooth over the mistake. Taking bright colors and a flesh tone I colored in the face and upper body. Once done I would take my finger that is moistened with a small amount of water and blended the colors to a smooth finish.

I found the candles at Toys R Us. All you have to do is light one end of the paper and it lights all your candles. It’s fun to watch and there is no wax that drops onto your cake. 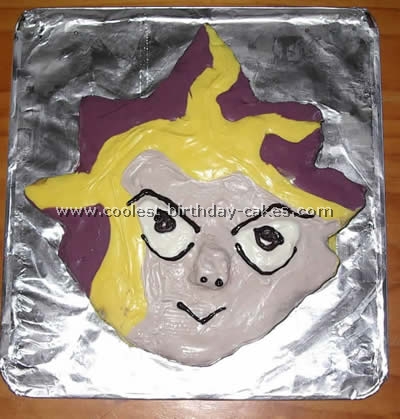 I just bought a yugioh character mask from the super market and cut out the same shape and just iced it to the matching colors…SO EASY! 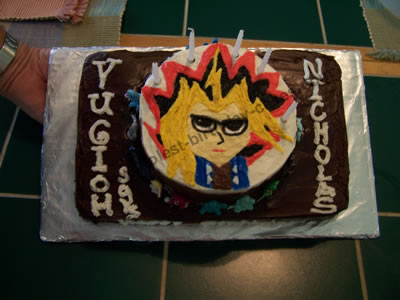 My grandson wanted a Yugioh character cake. I got some action figures on Ebay and was afraid I couldn’t use them because they were so small. 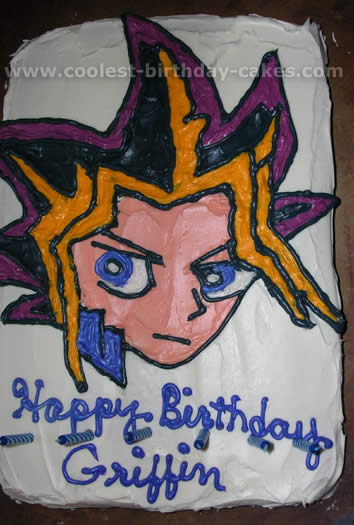 I have two young boys who love to watch and play Yugioh. So when I was buying a pinata for my younger son’s 6th birthday I came across a Yugioh character piñata, which helped me with his cake idea.

I drew a Yugioh character head on a piece of paper that measured perfectly center with the cake (our cake size was a 9 x13). I cut the drawing out to use as a stencil. I then frosted the cake with store bought frosting and gently laid the drawing on the top to outline the head onto the cake, using a toothpick. I removed the drawing and with a toothpick (using my drawing as a guide), I drew the rest of the lines for the hair and the face onto the cake frosting.

The reason I frosted it first is so that I can see the lines that the toothpick creates on the cake. I then chose my colors and mixed them into store bought frosting. I used a fine point writing top from my cake tips, put the colors into their right shop, and with a cake decoration knife gently frosted them smooth. It can be a bit time consuming but when you see your child’s face it’s worth the time. 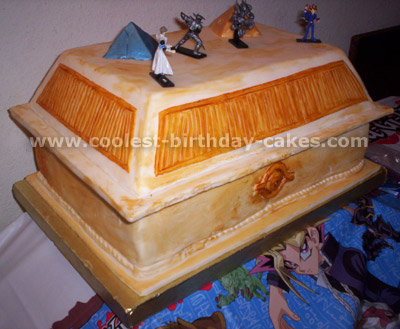 Read Lydia’s “Party-Tale”: The story behind the cake… 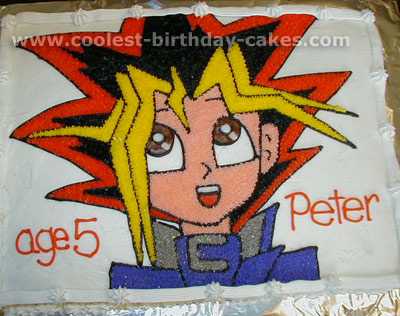