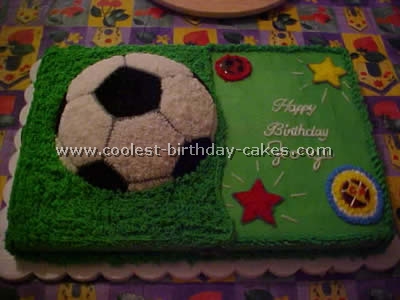 I made two birthday cake recipes for this Birthday Cake. I used a 12×18″ Oblong cake pan and for the soccer ball I used the Wilton soccer ball pan. I Used a #233 tip for the grass appearance and star tip for the stars. I also piped on a logo in the right hand corner for the Club America Logo.

This was a fun cake to make and not as hard as I thought it would be. Make sure you have a STURDY cake board to put this cake on. It’s heavy!

Cream together Crisco, sugar, salt, vanilla, butter cream flavor and half of your water. Blend until incorporated. Add remaining sugar and water. Use Wilton gel colors.

This is a soccer ball made with the sports ball pan (Wilton). Top and bottom half are cut and filled with jam and in between the halves is buttercream. The outside is covered in fondant mixed one on one with Marzipan. I mostly use this combination because the people here are used to Marzipan and do not generally like the flavor of fondant. This way I have the almond flavor of the Marzipan and the texture of the fondant.

I cut every patch of the ball separate using the template, which comes with the pan. The field is a square pound cake covered in buttercream. I used the grass tip on top and tip 352 – leaf tip – for the sides (holding the tip the wrong way so it made lines instead of leaves).

The scarf has the club colors of the boy’s favorite team and his name and age. I did not use any dowels or cake circles under the ball; the field is a strong enough recipe – the ball will stay on top. I did secure the ball to the field with one long dowel that I cut shorter than the total height and put in the field first than I lowered the ball over it. This was only for transport reasons. I hope you all like it!

My granddaughter turned 11 and she wanted a soccer cake. I used the birthday cake recipes on the box for the cake and let it cool. I made the frosting with a box of powered sugar sifted, 1 cup of Crisco shortening, 1 tsp of vanilla and 1 tsp of butter flavoring. I add milk a little at a time by spoonfuls to make the icing the right consistency. I used all her favorite colors to decorate the cake.

She had more children coming to the party so I made a second cake, decorated the same colors, and made it plain with Happy Birthday on it. I bought some medals and put them on the corners.

The cake is a basic Lemon Madeira, covered in butter icing before the fondant is put on (gives a smoother finish). I iced the board with two colours of fondant…squash it on, then roll it to flatten (leave to harden for a day or two).

The grass is coconut dyed with food colouring. Mould the leg out of fondant (remember the boot laces). A bit of ribbon and a candle, that’s about it. Anything that needs sticking on— use edible glue (available in most cake shops).

The cake itself, I find is always easier to handle, if frozen prior to decorating and also keeps better too. Happy baking girls!

I did this as a birthday cake. I used a mini ball pan for the soccer ball, which was on top of a larger rectangular cake. I used #233 tip for the grass.

This is a cake I made for my nieces 10th birthday. She loves soccer and requested a cake that looked like her teams jersey.

I baked two boxed cake mixes in a 11X13 pan (I also used some of the batter in a small spring form pan to later make a soccer ball). After the cake cooled I frosted it with a thin layer of white butter cream. I then traced her teams name and her number on to a sheet of parchment paper. I then turned it over and retraced it with black gel icing. I then placed it on the cake.

For the soccer ball I iced it first with white butter cream. I then used a small star tip to fill in the soccer shapes on the ball. My niece loved having her own little cake to eat and the jersey cake was a hit at her party.

My brother’s family is hosting a foreign exchange student from Germany. She made the varsity soccer team and I made her this cake for the celebration. It’s a chocolate cake with buttercream icing. I used a Wilton ball pan and followed their icing instructions. I sure am glad they included a pattern for a soccer ball. Who knew there are two different shapes on a soccer ball?!! (The red shapes are pentagons and the white shapes are hexagons).

My daughter plays soccer, so this cake was an easy choice! We had seen a cake that looked a lot like this in a bakery catalog, so I decided to copy it the best I could. I used a photocopied design I downloaded from the Internet as a template for the soccer ball.

I used a regular sheet cake pan and a Pyrex bowl to make this cake, as well as two cake mixes.

The soccer “goal” was done with various size round tips, and I created the “grass” with green icing and a pull-out tip, but you could get a grassy effect using a spatula as well. I wrote on the cake freehand. The soccer ball was sitting on an aluminum-foil covered cardboard circle the same size as the cake. I stuck a few plastic straws into the sheet cake where the ball would be sitting, cut them off level with the top of the sheet cake, then sat the ball on top of the straws for support.

When ready to serve, the soccer ball was lifted off the sheet cake and the birthday girl got to dive in to her own special “mini-cake”!

It’s one of my favorite birthday cake recipes.

I used a round sports ball cake pan to give the soccer ball its shape. I baked cupcakes in the opposite flavor of the cake and spelled out my son’s name. I placed this all on a round cake plate and used Wilton icing tip 67 to make grass swirls. I then threw some gummy worms down in the “grass”. The kids loved it. This is one of the simpler birthday cake recipes.

Instead of the usual black and white football (soccer ball), I decided to make it the American Flag colors. For the ball I used a ball pan, and marked the details accordingly using given instructions.

After ‘drawing’ the lines using white butter cream, I dotted the areas, which were to be blue and red to avoid confusion. Then fill these up first, and cover the rest with white last.

The ball was sitting on a 9″ round cake covered to look like a field. I found some chocolates covered in football foil and got some to put around the cake.