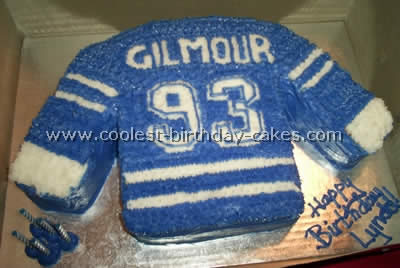 I’ve started a cake decorating business here in Oshawa and have had many requests for cool sports cakes, not something you can get at Loblaws. I was requested to do a Maple Leafs Gilmour Jersey for a co-worker’ mother-in-law who loves the Leafs. Anyway here is the finished product.

I baked a 12″X18″ slab cake in white cake and cut out the “body” of the cake which ended up being about half the size (approx. 12″X12″). I placed this piece in the centre of a 14″X17″ cake board. I then cut out the arms and placed them on either side of the body on the board and marked where I would need to cut on an angle to form the seam. Once I had the sizes correct I used a cake leveler to make a two layer cake. Once all the pieces were halved I added my luscious vanilla cream filling (a mix of home made vanilla pudding and homemade whipped cream), but before that make sure you use a “dam” of buttercream so the filling doesn’t ooze out the sides.

Once the filling was in and the top layer was placed on the cake I use slightly melted butter cream icing to make a skin on the entire cake for better decorating (you don’t get cake crumbs that way). Then I put the whole thing in the freezer to harden for better decorating ease. Before I put it in the freezer I used a piece of wax paper to cover the entire cake and traced the size of the cake to get the proper dimensions for the numbered jersey. While it was in the freezer I sketched the number and the name in the proper spots and drew where all the white lines needed to go. After about 20 minutes in the freezer I took the cake out and used the wax paper template to draw the design on the cake.

To do this I placed the wax paper on top and poked through it with a toothpick to imprint the design. I like this method better than transferring icing because it’s less messy. After I poked the design in I used a spatula to cover the sides in solid blue (using a buttercream mixed with Spiderman colour icing in dark blue) then I used the star tip to fill in the design. I find it easiest to block out the areas first then fill in but it’s up to you. I usually work from middle out. After filling the whole thing in I used the writing tip to make the blue lines in the number (which I would not do again, it looked almost perfect before I did this). And then I used a wet paper towel to clean the cake board.

After the cake is decorated and the board cleaned I used the star tip with blue icing to make circles on the cake board where I placed the candles. I do this because then wax doesn’t melt onto your masterpiece and I think it makes a better presentation. Then I use the writing tip to write a message requested by the person wanting the cake.

I’ll be sure to leave more pictures of my cakes on this site, especially sports cakes that I love to make. Many more to come!

When looking for ideas for sports cakes for my step-father’s birthday I ended up browsing the Hockey section of this site. I saw an absolutely beautiful Montreal Canadians cake that someone had made and thought it was a shame that no one had done a Toronto Maple Leafs cake since that is my step-father’s favorite team. So I decided to try it for myself since the Leafs don’t have a multi-colored logo like the Habs do (just blue and white) I figured that it wouldn’t be very hard.

Instead of making a cake in the shape of the logo I decided to do a regular two tier 9″ round cake and then do the logo shape in blue icing. I baked a double layer chocolate cake and did a crumb layer of frosting using Wilton’s Buttercream Icing recipe and let it set for around half an hour. I found the Leafs Logo on the internet and printed it out large enough to fill most of the 9″ space on the cake and then cut it out. I placed the paper logo on top of the crumb coat and traced around it with a toothpick. I then filled in the maple leaf using blue Buttercream Icing and #22 star tip. (Again the icing recipe was from the Wilton site).

I used Wilton’s Royal Blue Concentrated Paste to colour the icing. Then I filled in the rest of the cake with the undyed white buttercream icing and the #21 star tip. (#22 would have worked just as well but I don’t have two of the same tips and I was using both colures at the same time. This is the only reason I used two different star tips for this cake). I then did some sort of squiggle at the bottom of the cake (I can’t do shells very well) using the blue icing and Voila a Leafs cake for my step-father! I was going to attempt to write the team’s name inside the leaf like the actual logo but my “writing using an icing bag” skills are sorely lacking and decided to leave it as it is.

This is a most amazing site for cakes and many ideas for sports cakes and other cakes!

This cake was made for my sister’s birthday. She’s a big Ottawa Senators Fan! It’s two 9inch butter pecan cakes with a buttercream icing. I looked at other sports cake but found the picture on the internet and stenciled it onto waxes paper using a pushpin to make the holes in the waxed paper.

I then placed it on top of the cake and brushed cocoa powder over top. when you remove the waxed paper the stencil remains and you can ice your design over it.

I made this cake for my husband who is a huge Detroit Red Wings fan (hockey). I just baked a 9×13 cake and carved out the shape of the logo. I printed off a template I copied from other sports cakes and enlarged it on the computer.

This cake was very easy to make just a bit of carving and some imagination. It is all buttercream icing. It took a lot of red to get the red color. I used about 1/4 of the bottle of no Taste Wilton Red. I noticed that red tends to dry darker than when it is first mixed. He loved the cake!

Cake by Lisa B., Wheatleyon, Canada

My son loves hockey so decided to make him a sports cake of some sort. I used an 8 inch Styrofoam and a 7 inch Styrofoam for the bottom of the Stanley cup. I then baked different sizes of circles containers, the round glass containers that come with the lids, they seemed to work perfectly.

For the very top of the cake I used a round glass container, poured the cake batter in and then put a small glass ramekin on the top to form a ‘cup’. I used some coins to weigh it down. I used white icing and added a small amount of Wilton Black to make the grey. I also used pound cake and secured the cakes together with the long shish kabob skewers. At the bottom of the cake I used black Dutch candies that look like pucks! It was a great party!

This is a cake I made for my father-in-law. He is a Montreal Canadians fan and what better than to make any kind of sports cakes for such a fan. I created a layout in Corel Draw for a 9 x 13″ size cake pan. I mirrored the logo and lightened the colors red and blue to make it easy to trace.

I used the outline to shape the cake then I used wax paper to trace the logo with icing in the colors of blue and red. I then flipped it onto the cake and pressed it in. Some lines break when wax paper lifts off but they are easily fixed. Then it was a matter of filling in with #16 star tip.

Last year I had made an Army Tank cake in which I also have pictured on this site. My son is involved in hockey so this year I thought it would be a nice surprise and much easier to made sports cakes.

I purchased gel tubes so it would be easier to draw the lines and circles. Each time I would put a layer of icing I put it in the fridge in between so it would be easier to work with. I used small rimmed glasses to make a mark to draw the circles. My son’s little hockey players and zamboni came in handy for this one. It was one of the simpler cakes to make and my son was thrilled.

I always make “theme” cakes for my son’s birthday so this year I made sports cakes. They are always a big hit and very easy to make.

I usually use a boxed cake mix and use the cake as a canvas. For this cake I made 3 cakes, placed them side by side and iced them white. I made the lines on the ice with squeezable decorator’s gel and added hockey figures.

For the last 2 years my son has been getting really into hockey. So I decided to make a hockey puck with his favorite team logo “Edmonton Oilers”.

For the sports cakes I used two 9 inch round cake pans filled with chocolate cake batter. I trimmed cakes so they were leveled. Filled center will butter crème icing and exterior. I used chocolate icing and added black food dye. I let icing dry for a few hours then started to decorate logo. I continued to use butter crème icing but gel icing would work too. Good luck and I hope you enjoy the cake.

My Dad is a really big Montreal Canadians fan so for his birthday I thought of this unique sports cake. I just used a store bought cake and icing but I used concentrated paste instead of food coloring to get the deep colors.

I drew the image with a knife before using the icing just to make sure I didn’t make any mistakes I couldn’t fix.

I used a 19″ round cake pan with butter cream frosting, 3 cups of black frosting, and 3 cups of yellow and a white base. My Godson is crazy about hockey and about the Boston Bruins, so this was for him.