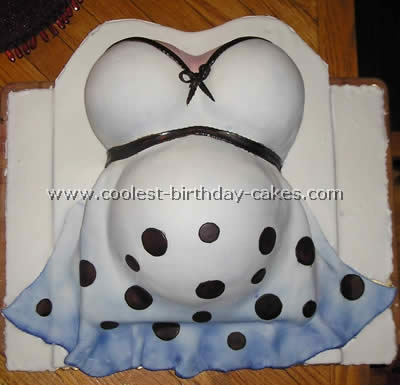 I made this baby cake for my niece. I used the Betty Crocker pan to get belly shape then placed atop a sheet cake and carved out. I laid fondant over the cake and airbrushed it. Polka dots are fondant as well.

I got the idea for this baby cake from this website. I made this cake for my best friend’s baby shower. We have been friends since first grade (we are now in our early 30’s.) Anyway I wanted to make it an awesome cake and I think I succeeded.

I started with a 12 x 18 inch sheet cake which I frosted in homemade butter cream. I use the Wilton recipe except that I add a little imitation butter flavoring. I also use water instead of milk because it can sit out longer that way. I used my Better Crocker bake’n fill dome pan for the belly and I used the insert for the breasts. Tip: let the insert cool before baking the second breast. Even though I coated the pan the second breast stuck horribly. luckily I was able to patch it with icing. I trimmed about 1/2 inch off of one side of each breast to nestle them together.

I cut the bottom half off of a Dot candy for the belly button and put it on with a little icing and let it sit for a while before I started the rest of the icing. I then used Wilton tip #47, flat side up, to pipe stripes of the green on a section at a time. Then I used the best cake decorating trick I have ever learned to smooth it out. Viva paper towels! You just lay the paper towel over the icing and gently smooth with your hands. Then you lift it off and if you icing isn’t to wet, it is like magic and no it doesn’t leave paper dust on the cake. This trick makes butter cream look like fondant and it tastes a lot better! I even used this trick to make the ripples in the bottom of the shirt. I just bunched icing up between my fingers under the paper towel.

Then I added the flowers on the neck line with Wilton tip left #106 and the bottom trim with tip #16. This baby cake was a huge hit at the shower and my friend loved it! Start to finish this cake took three box mixes, four batches of icing and about six hours to create. The smoothing of the icing took the most time. Unlike a flat surface that I can smooth in no time this took more work because I could only do small sections at a time. After it was too late I got the idea from another belly cake on this site to put a baby in the belly. With the bake’n fill pan this would have been so easy. I would have just put the insert in the dome pan and the belly would have been hollow and I could have used pudding or icing with a baby inside or just left it hollow with a baby inside. Oh well maybe next time.

This baby cake idea came from the person who requested that she wanted a cake like this for her shower. So I searched for visuals by looking at pictures of belly molds (belly cast) which were perfect. I started by baking all of my cake the day before it was to be decorated three sheets- 13 x 9. I think if I were to do it again I would use two sheets and two- 9″ round layers which would be easier for sculpting.

The icing I used between the layers and to adhere the fondant icing to the cake was cream cheese. I laid two sheets on the board side-by-side, sliced them in half (the long way) so that I could fill them with icing. Then I filled the last layer with icing and cut it up to make the breast and belly. I just eye-balled the pieces for the size that I wanted. I had to do a lot of trimming and sculpting to get the correct form. I used a picture of a belly mold cast as a reference. I worked the fondant into the desired color, yellow for the body (about 1 1/2 lbs) and rolled it out to about 1/2″. Then I crumb iced the cake with the cream cheese for smoothness and placed the fondant over the cake and trimmed it. I then airbrushed the breast line. I had some extra yellow fondant so I added the purple directly to this and made my dress ribbons.

Cake by Lisa M., Mishawaka, IN

For this baby cake I used three boxes of cake mix. These you can mix and match or make all the same. I used three metal mixing bowls for the boobs and the tummy. I used a round layer cake pan for the head. The tummy cake you will have to cook a little slower and at a lower temp since the cake is so deep. If you don’t want it to get to brown put a piece of foil over the top for about the last 20 to 30 minutes.

After all the cakes were cooled I assembled them into place and used butter cream icing to frost them. I then used royal icing to make the neck and the legs as well as some of the details on the cake. This baby cake is very easy to make and a switch to the normal baby shower cakes.

I placed the two cupcakes at the other end of the rectangular cake upside down. I then frosted the whole thing. I used gum drops for the belly button and nipples. It was a fun baby cake for our crazy shower!

For the top half we used a cupcake pan. For the belly we used the Wiltons soccer ball pan. We iced the cake with buttercream icing and then we laid fondant over the top.

The bottom layer of this baby cake is a sheet cake covered in butter cream. Bust and Belly made of cake baked in two different size bowls.

The dress, bow, flowers and “welcome baby” banner are made with fondant.

We found this cake on the web and have made it several times for baby showers. The Belly, boobs and head are cake; the arms and legs are frosting on the cake board.

You can make this cake either with Buttercream frosting or fondant; there are pictures of both.

The belly is the round pan that you can make soccer balls or the bottom of a Barbie doll; we even put a baby in the middle of one of the bellies.

The boobs and head are just Pfaltzgraff bowls from out dining set.

This is made using 2 cake mixes and 3 Wilton buttercream icing recipes.

Cake by Lisa B., Loretto, KY

For this baby cake, I made a sheet cake and iced it in buttercream. For the belly, I used the Betty Crocker bake and fill pan.

The boobs and dress are rolled fondant, colored and flavored. I rolled out the bottom half, formed around the belly, made pleats in the dress by inserting finger, form, and let dry.

Then made the top half of the dress, added some flowers and pearls for decorations. This pregnant lady baby cake is pretty simple to do.