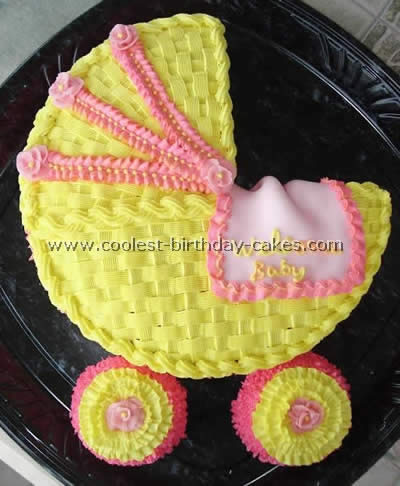 The carriages are very simple to make and a good baby shower cake idea. Just use a circle pan with a wedge cut out and the blankets are just fondant.

For this baby shower cake idea I baked a round butter cake then trimmed it to the shape shown. I iced it with yellow buttercream icing. I made the stripes in it by dragging a fork across the icing. The lacy parts are made from a paper doily trimmed to fit and the blanket was cut from the middle part of the doily.

For the baby face I wanted a ‘happy face’ biscuit which are available commercially in New Zealand supermarkets but as I was living overseas I wasn’t able to find any. Never mind, I made my own with a plain biscuit and some red icing gel. The wheels are peppermints with piped grey icing in the middle. The green bits are cut up pieces of mini marshmallows and the other bits are piped on using a star nozzle.

I really enjoyed the challenge of this cake. I made it for my best friend’s baby shower. I got the baby shower cake idea off Wilton.com and followed the instructions. I made the pillow and wheels out of a sugar cookie. I made the buggy top on the Wilton Easter Egg cake pan.

A useful tip: The instructions call to use shorting before applying the icing basket weave. This did not work. I had to wrap the pan with wax paper then apply the basket weave on the wax paper let dry for 24 to 48 hours then slowly pull the paper off.

I hope someone else will make this cake. Everyone at the shower could not stop talking about it.

I made this cake for a surprise baby shower we had for our classmate in my Italian language class. I used the Wilton baby carriage cake and followed instructions for the checker board pattern. I used a little of my own baby shower cake idea and made candies for the booties and rattle. The baby’s face is white chocolate with tip #2 black icing. (I poured the chocolate in a round cookie cutter to get a perfect circle). I added the baby’s name on the stroller for a personal touch! It was very much appreciated and the talk of the party. The icing was buttercream.

The cake was made in the Wiltons baby carriage pan and placed on top of a half sheet cake. I just used a box mix and I make my own icing. It’s an American buttercream. The cake mix saves time and money because I sell my cakes. I did a basket weave on the carriage and used a star tip for the cover and for the wheels.

For the final touch I accented with drop flowers and baby roses. My baby shower cake idea I got from many other cakes on this site!

This was my baby shower cake idea I had which I made for a baby shower. The nursery theme was bears and ducks so I wanted a cake that played up on the theme. I couldn’t find any toppers I liked that included both a duck and bear so I actually made this one custom from oven baked clay. (A new thing I thought I would try.)A little ribbon and mesh along with hot glue and viola!

The cake was done in two tiers both double layer. Frosted with buttercream icing and covered in white fondant icing. I used a wheel tool (sewing people would have and know what it’s actually called) to make the stitch line impressions to simulate a quilt. This is only the second cake I have done with fondant so I didn’t know all the techniques and tricks. I just made them up as I went along. I used the end of a paintbrush to make “dots” and line impressions on the squares. I added color by using watered down food color. It did make the sugar surface of the icing a little sticky but it worked in the end.

This was cake idea I created for my friend at work who is going to be a first time daddy. I used chocolate cake mix and a buttercream recipe I got from a local bakery. To decorate I used Wilson tools.

I had so much fun doing this cake. It is a baby shower cake idea I got from this site. It is a two layer chocolate pound cake. I don’t have oval pans so I carved round layers down to ovals. Basket weave on sides is buttercream and the blanket/pillow are marshmallow fondant. The hood is made from candy melts and covered in basket weave.

I had this baby shower cake idea for my baby shower that my family gave me while I was on bed rest with my pregnancy. I enjoyed having a fun activity to do to help get things prepared. I used the Wiltons cake pan shaped like the baby buggy and Wilton tips (mainly star tips) to create. I used colored icing to match the party table centerpiece as close as possible. I added a small rattle and an icing hand holding it so it would look like a baby was inside. It was tons of fun to make!